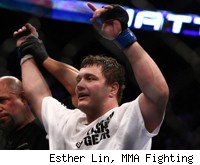 Matt Mitrione had another impressive showing Sunday night in Pittsburgh, as the former NFL player improved his mixed martial arts record to 5-0 with a second-round knockout victory over Christian Morecraft.

As he has consistently since breaking into the UFC through The Ultimate Fighter, Mitrione showed that his size and strength make him a force to be reckoned with, and he also showed impressive punching power in finishing the fight.

Mitrione also has a goofy sense of humor, which he showed off as well.

"I piss excellence," Mitrione said in the Octagon afterward.

After an exchange in the first couple minutes of the first round, Morecraft charged at Mitrione and took him down against the fence, but he wasn't able to do anything with his advantageous position. After a stalemate on the ground caused the referee stood them up, Mitrione went to town, dominating Morecraft with punches and finishing him with a three-punch combination that knocked out Morecraft's mouthpiece and left him sprawling on the canvas.