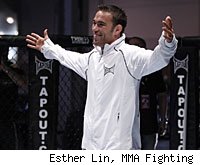 Though the fight has not yet been made official by the UFC, sources close to the bout confirmed to MMA Fighting last week that the fighters have agreed to the planned matchup for this fall.

While a location for the fight is not yet certain, one possibility is the UFC's planned Nov. 19 card in San Jose, Calif. That will be the promotion's debut in the northern California city, about 40 miles south of the San Francisco Bay area, where Shields lives and trains. That event is likely to be UFC 138, though it has not yet been made official by the UFC.

It's a fight that Ellenberger hasn't been shy about asking for. In May, he told several news outlets he wanted to fight Shields, and believed he has what it takes to beat him.

Shields (26-5-1, 1-1 UFC) lost for the first time in six and a half years and saw his 15-fight winning streak snapped against St-Pierre. Ellenberger (25-5, 4-1 UFC) has won four straight, including a first-round knockout of Sean Pierson at UFC 129.

Shields 15-fight streak included wins over Yushin Okami, Carlos Condit, Paul Daley, Robbie Lawler, Jason "Mayhem" Miller and Dan Henderson – yet Shields flew under many mainstream MMA radars until he signed with the UFC in the fall of 2010.

Shields, the former Strikeforce middleweight champion, challenged UFC welterweight champ Georges St-Pierre at UFC 129 in April after just one fight in the promotion. Opinions on the fight ranged from dominance by St-Pierre (one judge scored the fight 50-45) to the champ just barely getting by (two judges scored it 48-47).

Ellenberger (25-5, 4-1 UFC) has won four straight – three by KO or TKO. At UFC 129, he knocked out Sean Pierson in the first round. Ellenberger took that fight on less than three weeks notice, filling in for an injured Brian Foster.

Ellenberger has a strong wrestling background and is an assistant wrestling coach for the University of Nebraska-Omaha. Before signing with the UFC in 2009, Ellenberger fought for Bellator, M-1, IFL and Bodog, among other regional promotions.