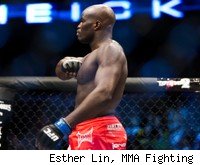 One of the most shocking endings in UFC history took place in the main event of Sunday night's UFC Live card, as Pat Barry appeared to poised to knock Cheick Kongo out with several brutal punches -- only to have Kongo recover and knock Barry cold with a brutal uppercut of his own.

If you didn't see it, you wouldn't believe it: This looked like something choreographed for a movie, not a real mixed martial arts competition.

Kongo and Barry traded hard kicks early in the first round, but they were feeling each other out more than anything else in the first two minutes. However, at the 2:15 mark of the first round, Barry connected with a huge right hook to the side of Kongo's head, knocking Kongo sprawling to the canvas.

More: UFC on Versus 4 Results | Cheick Kongo vs. Pat Barry Live Blog
Barry pounced and landed a few more punches, and referee Dan Miragliotta appeared to be about to step in and stop the fight. Kongo, however, somehow managed to stagger back up to his feet -- only to have Barry land another huge right hand that knocked Kongo down again. UFC announcers Mike Goldberg and Joe Rogan both screamed "He's out!" when Kongo went down the second time.

But Kongo wasn't out. He held onto Barry just long enough to regain his composure, got back to his feet, and then landed two enormous right hands of his own, the second one knocking Barry unconscious. That was it.

The fight lasted just 2 minutes, 39 seconds, and the real action only lasted about 30 seconds -- but it might have been the most thrilling half a minute in UFC history. This was a stunner.