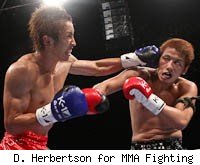 Aggression and a lack of defense cost him the belt in 2010, but Yuta Kubo made no mistakes this year as he cruised to decision victories against technical wizard Koya Urabe, 18-year old phenom Masaaki Noiri and pretty boy karate-ka Kizaemon Saiga to claim the K-1 2011 63kg Japan GP crown on Saturday night at the Yoyogi National Gymnasium 2nd in Tokyo, Japan.

Also on the card, K-1 veterans Yoshihiro Sato and Albert Kraus fought to a thrilling conclusion in a 70kg super fight with the hometown favorite taking a controversial decision.

Full results after the break.

In 2010, Yuta Kubo made a fatal mistake in the finals of the 63kg tournament: he threw caution to the wind and over-committed with punches in search of the knockout against power-house Tetsuya Yamato. On that occasion, Kubo got caught with a counter punch midway through the last round and he crumbled to the canvas.

Although Kubo's opponent, Koya Urabe, was barely able to stand by the start of last round of 2011 GP final bout due to accumulated damage to his legs, this year Yuta Kubo chose to play it safe in the final stanza.

A late rally with punches from Urabe was damaging, but proved too little too late as cracking kicks to the body and legs through the first two rounds had given Kubo a handy lead. All three judges had no issues awarding Kubo the win and the 2011 63kg Japan GP belt.

Kubo utilized his strength advantage to take the decision over 18-year old phenom Masaaki Noiri in their semi final match, throwing the koshien champion to the canvas, roughing him up and landing heavier blows in order to take a comfortable decision.

In a quarter final bout pretty boy karate-ka Kizaemon Saiga proved an interesting stylistic match up for Yuta Kubo, but like Noiri in the semi-finals, the eventual champion was able to land the harder kicks and toss Saiga around the ring to take the decision.

Although Koya Urabe's hands and footwork were slick enough to easily get past renowned low-kicker and R.I.S.E. 60kg champion Yuki in another quarter final bout, Urabe elected not to defend leg kicks, preferring to land his own punches instead. He won the decision but Urabe paid the price for his mistake as by the end of the fight, his movement was essentially reduced to naught - something which Yuta Kubo would exploit later.

In a 70kg super fight, Yoshihiro Sato and Albert Kraus fought a highly technical bout and were inseparable going into the final round of the bout. With the fight up for grabs, the pair stood toe-to-toe in the final minute and threw down in search of a definitive blow that would give them the edge with the judges. Both fighters were rocked during the exchange and there seemed to be no clear winner as the fighter's corners were readying for a second round. Two judges however, had rendered a decision in Yoshihiro Sato's favor, much to the disgust of Albert Kraus.