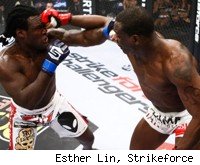 OSP, who went 6-0 in 2010, was discussed as a potential opponent for Rafael "Feijao" Cavalcante prior to Zuffa acquiring Strikeforce, but that fight was scrapped after the purchase.

The Haitian-American St-Preux, a former linebacker for the University of Tennessee, holds wins over Abongo Humphrey, Benji Radach and Antwain Britt in Strikeforce.

Strikeforce Challengers 17 will mark the organization's first event in Las Vegas. It will be held at the Pearl at the Palms Casino Resort and will air on Showtime. The main event will feature Roger Bowling vs. Bobby Voelker III.