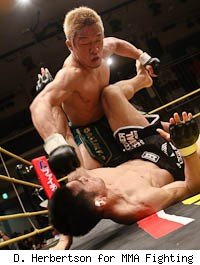 Only weeks after losing a split decision to bow out of the DREAM Bantamweight GP, Takafumi Otsuka returned to action on Friday night at Deep 54 at Korakuen Hall in Tokyo to capture the recently vacated Deep bantamweight title. Otsuka put on the aggressive striking and wrestling clinic that many thought he was capable off, handily dispatching a game Hiroshi "Iron" Nakamura to claim his second Deep strap.

Reigning Deep light heavyweight ace Yoshiyuki Nakanishi gave up several inches and quite a few pounds in muscle to comedian/fighter Bernard Ackah but that didn't stop him from brutally soccer kicking the challenger into unconsciousness only 67 seconds in to retain his title.

In other bouts, former Sengoku mainstay Kazunori Yokota utilized his speed to outpoint Shoji Maruyama and UFC and DREAM veteran Ryo Chonan rebounded from a scary knockout loss in his last outing to deliver his own brutal KO of Shigetoshi Iwase.

AACC's Takafumi Otsuka has always been considered supremely talented but his lack of aggression has led to him losing a lot of close bouts - five out his six decision losses being split or majority decisions.

But after faltering in the DREAM Featherweight GP in 2009, losing his Deep featherweight belt and losing again in the DREAM Bantamweight GP last month, Otsuka seems to have finally got the aggression and killer instinct he has desperately needed. Tokyo Yellowman's Hiroshi "Iron" Nakamura, who bested then-champion Masakazu Imanari back in February, lived up to his name and proved difficult to finish but Otsuka uncharacteristically piled on the offense through three rounds, coming close to earning the referee stoppage on two occasions and landing a sickening soccer kick to the face en route to winning the vacant Deep bantamweight strap.

Nakanishi, who was returning from a failed expedition to middleweight, stood toe-to-toe early with his much larger opponent before seizing the opportunity for an easy double-leg takedown in the corner. With Ackah defending punches in guard well though, Nakanishi simply stood up and delivered a cracking soccer kick straight to the face of Ackah to KO the challenger and retain his title.

"Grabaka Speed Star" Kazunori Yokota lived up to his nickname, evading and out-striking an aggressive Shoji Maruyama to claim the unanimous decision. Yokota's footwork, front kicks to the face and body and hand speed allowed him to control the bout from the ring perimeter as the Sengoku veteran was constantly one step ahead of the slugger, outpointing Maruyama to win the judges' favor.

Ryo Chonan's scary 19-second knockout loss to Taisuke Okuno in December 2010 was bad enough that many were questioning his future in the sport. Chonan, returning for this first time since his faceplant at Sengoku, proved the doubters wrong though as he returned in stunning fashion, delivering an equally scary knockout to Tatsuya Kawajiri teammate Shigetoshi Iwase.

Chonan, keeping his hands high to protect his chin, was landing slightly in the standing exchanges early in the first stanza, but a hellacious left hook crushed Iwase and sent him unconscious to the canvas. As he saw his opponent fall, Chonan instinctively leapt several feet into the air to deliver what would have been been a hugely damaging stomp. Fortunately though, Iwase fell underneath the ropes and Chonan's leg became tangled before the blow was delivered.