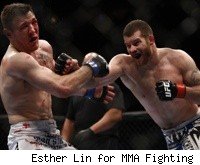 Nate Marquardt didn't have to be in the UFC's makeshift workout room the night before the UFC 128 weigh-ins. But hey, he had friends who still had a few pounds to sweat off, so there he was, sitting on the floor in a t-shirt and jeans, keeping them company. Solidarity with the starving, and all that.

Only Marquardt wasn't starving. Even though he also had to weigh in less than 24 hours later for his fight with Dan Miller, he wasn't even especially hungry.

That's because while Marquardt was fighting at 185 pounds, he wasn't doing it the way most guys did. Instead of cutting down from well over 200 pounds in the weeks and days before the fight, he was more or less already on point. All he had to do was show up on the scales and flex.

That's why it should have come as no surprise when Marquardt announced that he was moving down to welterweight following his unanimous decision win over Dan Miller at UFC 128. It wasn't that he had no further prospects at middleweight, he said. It was just that it had started to seem foolish to try and put weight on in training camp, rather than take it off.

"I feel I could get the title shot and get the title at 185," Marquardt said. "If that opportunity ever arises, I'll go do that. But for now, I'm going to stay at this weight, at my walking around weight. I'm not going to try to bulk up anymore. I just want to stay here."

But dropping to 170 pounds for his fight against Rick Story on Sunday night's UFC Live fight card also meant that Marquardt would have to forego some of the luxuries he'd previously enjoyed, such as eating what he wanted without ever giving a thought to calorie content.

Now he suddenly needed to lose weight for the first time in a long time, which is where nutritionist P.R. Cole came in.

"He looks so big, and that's why everyone thought, my God, how's he going to make 170?" said Cole, who first came into contact with Marquardt when interviewing him for her nutrition column on UFC.com. "But when he was fighting at middleweight he wasn't cutting that much. He was just used to going through camp and eating for fuel. He had the pleasure of never really having to think about his calories or anything."

This time around Marquardt has had to start thinking about portion sizes more than ever, but the potential rewards may be more than worth the sacrifice. For starters, he'll be fighting smaller opponents, which means he'll likely have a strength advantage.

Then again, as Marquardt explained, "I feel I had a strength advantage at 185 [pounds]. It doesn't really matter who I go against, I feel that I'm almost always going to be stronger. The fact that I haven't lost any strength going down means it's only more so."

But perhaps more important is the new life he hopes to find in a new weight class. Unlike many fighters who make the decision to drop down in weight, Marquardt wasn't chased down by losses. He went down following a win, but he also did it following a year in which he lost two no. 1 contender fights at 185 pounds.

Now at welterweight, he has a clean slate to work with, and he feels he could be "anywhere from one to two fights away" from a title shot. The fact that, because of an injury to his original opponent, he now gets to fight a guy like Story, who's coming off an upset win over Thiago Alves? That only sweetens the deal for him, Marquardt said.

"I think the fact that Rick Story just beat Thiago Alves, who was considered a former number one contender, that's a pretty big deal. I can't really think of anyone [Anthony] Johnson beat like that. Not saying that he's not tough, but their records, Story has that and Johnson doesn't," he said.

"I expect him to come forward the whole time and kind of try to make it a dirty fight, because I think he knows that I'm going to be better in most areas. I think he'll probably have a similar game plan as he did against Thiago Alves, really."

If Story is the young rising prospect in this scenario, then Marquardt is more than willing to play the role of the grizzled veteran. After all, he was fighting for a living when Story was still in high school. With those years comes a lot of hard-won knowledge, Marquardt said.

"That's a good feeling to know that I know a lot more than this guy. The fact that he's this young up-and-comer, to me that just means that he doesn't know that I'm in a different league. He's going to have problems that way."

For Story, it might be a chance to add another big name to his list of victims. But for Marquardt, it's a shot at a new beginning. And he didn't spend the last eight weeks counting all those calories for nothing.