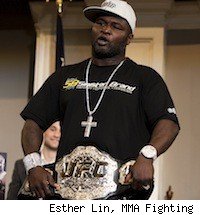 When it comes to mixed martial arts, James Toney still has fight left in him.

Most people believed the multi-divisional boxing champion was one and done in the sport after losing to Randy Couture last August, but nearly a year after the disastrous debut, Toney has decided to return for another go-round. Toney and MMA pioneer Ken Shamrock have both signed on the dotted line to oppose each other in a fall event that is still being planned.

BJPenn.com first reported the matchup, attaching it to a September 23 date in El Paso, Texas. Sherman, though, said to his knowledge, neither a date or location has been finalized. He said that Toney, Shamrock, their management teams and event promoters would meet this Saturday night to further discuss particulars.

"The earliest date as I know it would be late September, and the latest would be late October," said Sherman, who added that Texas, California and Nevada were the three potential sites discussed, with Texas as the most likely destination.

Also undecided is whether the match will take place under an established promotion, or as a stand-alone event of fights offered on pay-per-view. Sherman further mentioned that a reality series could be attached to the bout.

Toney's only pro MMA fight occurred against one of the sport's all-time legends. At last August's UFC 118, Couture took him down inside the opening 20 seconds and eventually forced Toney to tap to an arm triangle. Since then, Sherman said that Toney has done little MMA training aside from occasional grappling sessions. He has mainly focused on boxing, where he fought and retained his IBA heavyweight title with a unanimous decision over Damon Reed in February 2011.

The 47-year-old Shamrock was once one of MMA's most intimidating fighters, but has won just twice since 2005, going 2-7 during that time. His last bout came last November, when he lost via TKO in the first round after injuring his knee.

Sherman said Toney promised to dedicate himself to training, and that they would invest time in working on takedown defense to keep the fight in Toney's comfort zone.

"The takedown is Ken's only chance," Sherman said. "I respect Ken as much as I do Randy. He's one of the reasons we have this art. But he can't stand with James. Randy proved that. He didn't stand with him for 10 seconds. No one will make that mistake. I want James to go in with hands down by his waist and dare Ken to punch with him."

Sherman said that Toney was adapting well to takedown defense in practices with experienced wrestlers but made a mistake against Couture that he wouldn't replicate against Shamrock. Even since then, he said that whenever Toney trains with wrestlers, he hurts them on the way in, and with small gloves, it may only take one well-placed punch to put Shamrock out.

Toney will prepare for the fight at the recently opened International Fight Center in Van Nuys, California. His team believes that with a win over Shamrock, Toney could put himself in place for a few paydays from promoters looking for unsigned drawing cards, and that if he can string a few wins together, a seemingly impossible goal looms for the soon-to-be 43-year-old: a return to the UFC.