Injury to 'Cyborg' Santos Forces Him Out of Paul Daley Bout 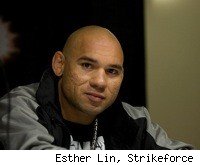 A shoulder injury has knocked Evangelista "Cyborg" Santos out of his scheduled July 30 Strikeforce fight with British bomber Paul Daley, MMA Fighting has confirmed through sources with knowledge of the situation.

The injury was first reported by MMAPrime.tv.

A source told MMA Fighting that Strikeforce was at work on finding a suitable replacement.

The Daley-Santos fight had only been announced less than two weeks ago, and was expected to be an exciting addition to the card at Hoffman Estates, Illinois. The duo are known as two of the fiercest strikers in the promotion's welterweight division, as Santos has earned 11 of his 18 career wins by knockout, and Daley has 20 of his 27 via KO.

With just over one month to go, there may be limited options to replace him. One possibility is undefeated rising star Tyron Woodley, who has nothing scheduled at the present time. Last month, Woodley told MMA Fighting that he was hopeful of a July return and preferred a bout with Daley. Though that fight didn't materialize at the time, his manager later told MMA Fighting that Woodley would ramp up his training and be prepared in case a slot should open.

Daley (27-10-2) is coming off a first-round TKO loss to Nick Diaz in an April championship bout. Afterward, Diaz vacated the belt to move to the UFC and a chance to fight its champion Georges St-Pierre. With Diaz gone, the division is in a state of flux, and Daley is back in the mix for gold. Now, all he needs is an opponent for July 30 and a chance to prove it.