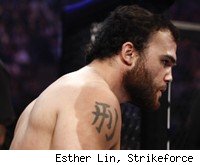 Strikeforce announced the fight via Twitter on Thursday. The fight is expected to be part of the main card for Strikeforce: Fedor vs. Henderson, which takes place at the Sears Centre in Hoffman Estates, Ill., a northwest suburb of Chicago.

Lawler (18-7, 1 NC, 2-3 Strikeforce) fights for the first time since a January submission loss to Strikeforce middleweight champion Ronaldo "Jacare" Souza in San Jose, Calif. Lawler got that title shot on the strength of a 50-second knockout of Matt Lindland about two months earlier in St. Louis.

Kennedy (13-3, 4-1 Strikeforce) returns after making quick work of Melvin Manhoef at Strikeforce's March show in Columbus, Ohio. In that fight, he submitted the Dutch kickboxing specialist in the first round.

Kennedy, too, has a loss to Jacare on his resume. Kennedy, a Bronze Star medal winner in the Army, fought Jacare for Strikeforce's vacant middleweight title after Jake Shields vacated the belt to sign with the UFC. That loss was his only one in six fights.

Lawler, the former EliteXC middleweight champion, has had an up-and-down stretch since winning that belt in September 2007 against Murilo "Ninja" Rua. After EliteXC folder, Lawler picked up with Strikeforce – but it was almost a year between fights for him. Since his Strikeforce debut, a loss to Shields, he had a pair of 2010's best knockouts against Melvin Manhoef and Matt Lindland, plus a decision loss to Renato "Babalu" Sobral. Lawler hasn't had a winning streak since 2007.

Strikeforce: Fedor vs. Henderson features a main event between light heavyweight champion Dan Henderson and former pound-for-pound MMA kingpin Fedor Emelianenko, who is looking to rebound from consecutive losses for the first time in his career.

The show will be Strikeforce's second in the Chicago area, and second at the Sears Centre. The promotion's first trip to the venue featured a heavyweight tilt between Fedor and Brett Rogers, a fight Fedor won by second-round TKO – his last victory. That main card was broadcast live on CBS. The July 30 show's main card will be televised by Showtime.