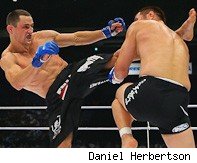 Prior to their first meeting during the 2009 Welterweight GP, Sakurai had struggled badly to cut the required weight and questions were raised as to his readiness and commitment to fighting. During the bout however, Sakurai traded evenly with Zaromskis early but was eventually on the receiving end of the Lithuanian's signature head kick and was pounded out for the first round stoppage.

Since then, although the reigning champion Zaromskis has managed to pick up two more wins in Japan and keep his belt but his trips to America have been disastrous, going 0-3 with one no contest. Sakurai has been even more troubled since their first meeting as the knockout loss was the start of an 0-4 slide that has yet to be broken.

The full card after the break.