T.J. Grant vs. Charlie Brenneman UFC on Versus 4 Fight Scrapped Due to Illness 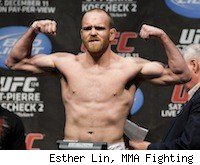 An illness has forced T.J. Grant out of his scheduled UFC on Versus 4 bout this weekend, knocking a welterweight matchup with Charlie Brenneman off the card.

Grant was coming off a UFC 124 decision loss at the hands of Ricardo Almeida last December. Though he's 16-5, he's lost three of his last five bouts, alternating losses and wins. He was originally slated to fight Matt Riddle in the event, but an injury knocked Riddle from the card, and Brenneman stepped in to replace him.

The New Jersey-based Brenneman was hoping to build on the momentum he earned during a January decision victory over Amilcar Alves. There was no word on whether the UFC tried to find a replacement for Brenneman on short notice, but it would have been a tough task with just four days until the event.

UFC on Versus 4 takes place on Sunday from the Consol Energy Center in Pittsburgh. In the main event, Nate Marquardt faces surging Rick Story in a key welterweight division scrap.

With Grant-Brenneman scrapped, the event will go off with 11 total fights.