With Excitement and Fear, Chris Leben Prepares for Wanderlei Silva 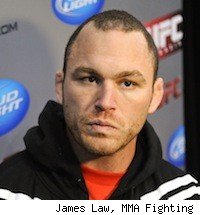 Chris Leben remembers first wanting to fight Wanderlei Silva nine years ago, before he was even close to competing in the UFC. He barely remembers it now, but says old friends and training partners have reminded him of it in the last year or so, since he first began his campaign to fight Silva.

But when he finally received the call from UFC matchmaker Joe Silva that he'd been granted his wish, Leben was not quite as joyous as you might have expected. As he tells it, it was something of a "be careful what you wish for" moment when the realization hit him that he was going to have to fight the legendary "Axe Murderer" at UFC 132.

Even since then, the emotions have not fully changed for Leben, who has stared down inner feelings of conflict regarding the matchup. On one hand, he is overwhelmingly thrilled about facing someone he once looked up to as a hero. On the other, Leben is coming off only the second knockout loss of his career, and has to do it against one of the sport's most aggressive and powerful fighters.

"I'll be honest, I'm excited to fight Wanderlei and I'm a little scared at the same time, too," he said on a Tuesday teleconference. "For me that's a very motivating and driving emotion."

For Leben (25-7), the loss against Stann forced him to reevaluate many things. He had been riding a three-fight win streak, including two fights in two weeks, and he had a full camp in which to prepare for Stann. The match figured to be a test of each man's firepower, and Leben, who is blessed with tremendous power and an excellent chin, liked his chances. But when the fight went down, so did Leben, the victim of a first-round TKO.

The loss deeply affected Leben, so much so that he went for counseling shortly thereafter.

"We've all had our wins and losses," he said. "The bottom line is you've got to get back on the horse. This is going to be my 19th fight in the UFC. So I've been around a while. A loss isn't going make me perform bad the next time. I don't lose all my belief in myself or anything like that. Basically, I look back and go, 'Well, I messed up. What worked in camp? What worked in the fight and what didn't work?' After I analyze that, I try to change a few things. That's what I've done. This sport, the way I look at it is a continual learning curve. I've never stopped learning. Not just the skills but also our life outside of fights, our diet. Everything leading up to the fight I'm constantly trying to change and tweak and find out how can I get another two percent out of myself."

But at least for this fight, there's an additional factor, and that's the presence of Silva across the cage. Though he's lost two of his last three and five of his last seven, Silva (33-10-1, 1 no contest) is regarded with reverence by many of today's fighters in equal parts for the heart he's displayed throughout his career as well as his many successes in combat.

Whatever you make of Silva's rough recent stretch, he's officially 1-0 as a UFC middleweight after a win over Michael Bisping in what seems forever ago at UFC 110, way back in Feb. 2010. Since then he's been recovering from injuries and surgeries.

Everyone figures that Silva plus Leben will equal fistic fury, and even though he wanted the fight and got it, that doesn't exactly make Leben happy. In fact, Leben dropped a surprise when discussing his fighting future when he said, "I'll be honest with you: I don't like fighting. I love the training. But the day of the fight, anyone who says they really love it, they're probably lying to you."

Leben says he can remember back to his very first fight, standing in the cage and looking across at his opponent wondering why he had possibly decided to do this. But once the bell rings, he switches gears and gets to work. It's that same fear that drives his training, and motivated him to challenge one of his all-time favorites.

For whatever it's worth, Silva said on Monday complimented Leben's style, saying "he fights like me." For Leben, that is simply another reason to work hard and prepare for a fight years in the making, at least in his own mind. Even if Silva has slowed down a fraction of step, to Leben, he's still the same "Axe Murderer" that struck fear in the hearts of the world's best at one time. For Leben, that fear is nothing to run away from. It's something to embrace as a useful tool.

"He's an animal. There's nothing more motivating than fear of a coma," he said with a laugh. "Honestly, I'm so psyched to fight Wanderlei Silva. He's one of my heroes. I don't want to tell him this, but when I started fighting, I would get bootleg PRIDE videos and in some ways try to emulate some of the stuff he did. You've got to beat a legend to be a legend. To fight one of my heroes, I'm so stoked. A passing of the torch is kind of what I'm hoping for. A little fear is good. I might be a little worried, but you know what? I'm going to get in there and do what I do because as men, that's what we do. We look our issues and fears in the eye, and then we conquer them."