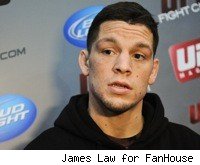 Four years ago, Takanori Gomi fought Nick Diaz in one of the best fights in the history of Pride. Now Gomi is slated to get a crack at Diaz's little brother.

The UFC has announced that Gomi will face Nate Diaz at UFC 135, adding what should be a very entertaining lightweight fight to the September 24 card in Denver.

Gomi's fight with Nick Diaz was a classic. Gomi, the Pride lightweight champion, entered as the favorite, but Diaz wore him out with his wild striking and his activity off his back, eventually submitting Gomi with a gogoplata in the second round. The bout was later changed to a no contest because Diaz tested positive for marijuana, but fans still remember it as a great fight, and as the performance that put Diaz on the map.

UFC President Dana White made a point of commenting on the previous Gomi-Diaz fight in announcing the next Gomi-Diaz fight, and you can bet highlights from that 2007 Pride bout will be shown regularly in the run-up to UFC 135. We can only hope Nate Diaz, who's moving back down to lightweight after looking sluggish at welterweight, can look half as good against Gomi as his brother did.