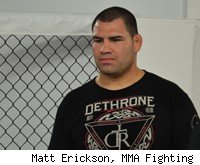 Cain Velasquez and Junior dos Santos have proven beyond a reasonable doubt that they're the two best heavyweights in mixed martial arts. The rest of the division is a jumble.

So in our latest rankings of the top heavyweights in MMA, Velasquez and dos Santos are a clear 1-2. See where 3-10 stack up below.

(Editor's note: The individual fighter's ranking the last time we did heavyweights are in parentheses.)

1. Cain Velasquez (1): Although the 9-0 Velasquez deserves to be considered the No. 1 heavyweight in the sport as long as he stays unbeaten, his inactivity because of a torn rotator cuff is going to raise serious questions about whether he'll be able to return at 100 percent. He's tentatively scheduled to defend his title on November 19, which is 392 days after he won the belt from Brock Lesnar. It's never easy for a fighter to return after more than a year off, even if he's completely healthy.

2. Junior dos Santos (2): After the whipping dos Santos put on Shane Carwin, it's easy to see why the oddsmakers installed him as the favorite against Velasquez. Dos Santos is an amazing physical specimen whose striking technique is superb. He's also younger than Velasquez and healthier than Velasquez, and there's every reason to think he'll return to the cage looking even better than he did against Carwin.

3. Alistair Overeem (7): I don't want to diminish what Overeem accomplished against Fabricio Werdum: Overeem handily beat a man who had himself handily beaten Fedor Emelianenko, Antonio Silva and Mike Kyle in his last three fights. But Overeem didn't do anything to make me think he's on the same level as Velasquez and dos Santos.

4. Brock Lesnar (3): From all indications, Lesnar will sit out for well over a year when it's all said and done: He fought Velasquez on October 23, 2010, and he likely won't fight again until 2012. With his health problems and long periods of inactivity, it's hard to see Lesnar ever becoming the champion again.

5. Fabricio Werdum (5): Werdum is the best heavyweight grappler in the world, but he'll never be the best heavyweight MMA fighter in the world until he figures out a way to really exchange with good strikers. Werdum's usual method is to get passive when a good striker hits him. Sometimes that works -- as it did against Fedor, who foolishly jumped into Werdum's guard after knocking him down. But usually it fails, as it did in Werdum's decision losses to Overeem and to Andrei Arlovski. (Of course, Werdum's stand-up really failed when he fought dos Santos, who knocked him cold in 81 seconds.)

6. Antonio Silva (6): Bigfoot will provide an interesting stylistic matchup with Overeem in the next round of the Strikeforce tournament: Like Werdum, Bigfoot has better Brazilian jiu jitsu skills than Overeem. And unlike Werdum, Bigfoot is big and strong enough to take Overeem down and keep him there. I think Overeem's superior striking will earn him the win in that fight, but Silva is a threat.

8. Frank Mir (8): Mir has now won two in a row since the beating he took at the hands of Carwin, and he's been making noises about getting a second shot at Carwin. That's a fight the UFC should consider booking.

9. Fedor Emelianenko (9): The greatest heavyweight in MMA history is on a two-fight losing streak and hasn't won since beating Brett Rogers in 2009. Fedor's upcoming fight with Dan Henderson is an interesting match-up but won't do anything to bolster his rankings within the heavyweight division: If Fedor wins it just proves that he can beat someone who's older and smaller than him, while if Fedor loses it's another piece of evidence that he's well past his prime.

10. Josh Barnett (NR): Barnett is now back in the Top 10, having finally gotten sanctioned to fight in America and beaten a relatively good opponent. I don't think the 33-year-old Barnett is on the same level as the truly elite fighters in the heavyweight division, but I do think he's good enough to beat Sergei Kharitonov and advance to the tournament final, where he'll be a dangerous opponent for either Overeem or Bigfoot.