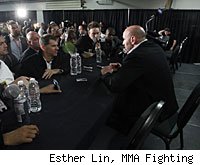 Add another country to the list of places that UFC can lay claim to, as the promotion sold out its long-awaited return to Brazil in 74 minutes.

The August 27 event at HSBC arena sold its allotment of 16,572 seats in a flash.

The promotion has not held an event in the nation that is largely considered MMA's birthplace since October 16, 1998, when UFC: Ultimate Brazil took place in the country's largest city, Sao Paulo.

That was over two years before the fight organization was purchased by current owners Zuffa LLC.

Since then, the UFC has visited various parts of the world including the UK, Ireland, Germany, Australia and the United Arab Emirates.

The UFC Rio event, officially dubbed UFC: Silva vs. Okami, is headlined by a rematch of a 2006 bout between current UFC champ Anderson Silva and Yushin Okami. In that first fight, Silva was disqualified for an illegal upkick, giving Okami a win. It was the last time anyone has left the cage with Silva credited for a victory. Since then, he has won 14 straight fights.