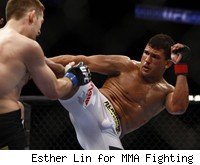 It's been six months since the UFC began experimenting with preliminary card fights on Facebook, and on Sunday it will set a new high-water mark.

The promotion on Monday announced that all eight undercard fights for the upcoming UFC on Versus 4 show will stream live on the social networking site. Just last week, with UFC 131, the promotion set a new best with six prelims streaming on Facebook.

This will mark the 11th consecutive fight card that the UFC has streamed fights for free at Facebook, and it will be the fifth consecutive show the promotion has provided a way for fans to see each fight on the card live.

UFC on Versus 4 will feature a four-fight main card that airs live on the Versus cable channel, the second of the UFC's four-fight 2011 deal with the channel. The Facebook live stream is scheduled to begin at 4:55 p.m. Eastern. The main card starts at 9 p.m. Eastern on Versus. Versus will also again produce a live pre-fight preview show and post-fight analysis show before and after the main card featuring Todd Harris, UFC light heavyweight Stephan Bonnar and MMA Fighting's Ariel Helwani.

To gain access to the fights, viewers must "like" the UFC on Facebook. As of Monday evening, the UFC has more than 5.7 million fans at the site.

The "main" and "co-main" events of the Facebook prelims are featherweight bouts featuring a pair of former lightweights dropping down – both looking to snap out of disastrous three-fight losing skids.

And Joe Stevenson (31-13, 8-7 UFC), the Season 2 welterweight winner of "The Ultimate Fighter," goes for his first win since October 2009 when he takes on Javier Vazquez (15-5), who makes his UFC debut after going 2-3 in the WEC. Stevenson has dropped decisions to George Sotiropoulos and Danny Castillo, and was knocked out by Mac Danzig in December. Stevenson is 3-6 since challenging BJ Penn for the lightweight title at UFC 80 three and a half years ago, including the loss to Penn. Monday, on "The MMA Hour," Stevenson talked about his dislike of Vazquez and why he dropped to featherweight.

The Facebook prelims stream opens with a lightweight bout between TUF 12 runner-up Michael Johnson, fighting for the first time since losing to Jonathan Brookins in December on the show's finale, against Edward Faaloto, who makes his UFC debut after a loss in his WEC debut last November.

Nik Lentz (21-3-2, 5-0-1 UFC) tries to remain unbeaten in the UFC against submission specialist Charles Oliveira in a lightweight bout.

Rich Attonito drops from middleweight after a loss to Dave Branch in December to make his welterweight debut against Daniel Roberts, who lost to Claude Patrick at UFC 129 in April. Attonito was original scheduled to face Matt Brown, but an injury to Martin Kampmann forced him out of a fight with John Howard, and Brown moved up the card for that fight. Roberts stepped in to face Attonito.

Other bouts include a featherweight contest between Ricardo Lamas and Matt Grice, a welterweight bout between Charlie Brenneman and TJ Grant, and Joe Lauzon returns for the first time since a UFC 123 loss in November to Sotiropoulos to face England's Curt Warburton.

The UFC began streaming preliminary fights in January with its Fight for the Troops 2 show at Fort Hood, Texas. Since then, the promotion has included free Facebook fights for each event, regardless of the main card's platform – be it on pay-per-view, Spike or Versus.

UFC on Versus 4 takes place Sunday at the Consol Energy Center in Pittsburgh, and will be the promotion's first event in the Pennsylvania city. The card features a main event between Nate Marquardt and Rick Story – with Marquardt making his welterweight debut and Story fighting on short notice after a win just a month prior against Thiago Alves at UFC 130. Marquardt was scheduled to face Anthony Johnson, but an injury forced Johnson off the card.

And in a pair of heavyweight bouts, kickboxing specialists Pat Barry and Cheick Kongo clash, and Matt Mitrione looks to stay unbeaten against Christian Morecraft, whose last win sent Mitrione friend and training partner Sean McCorkle packing from the UFC.