Joe Stevenson on Hatred of Javier Vazquez: 'I Really Will Break Something' 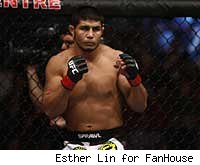 Joe Stevenson is known as one of MMA's good guys, a polite, upbeat athlete whose nickname is "Daddy" because of his devotion to his four sons. But it's his protective fatherly instincts that are fueling Stevenson for his upcoming UFC on Versus 4 matchup against Javier Vazquez.

On a popular MMA messageboard, one of Vazquez's relatives is running a contest in which people are using Photoshop to alter pictures of Stevenson in various ways, some humorous, others far more offensive.

While Stevenson hasn't personally seen the pictures, he worries about his sons finding them online. And because of that, his anger towards Vazquez has grown to the point where he thinks it may cause him to snap during the fight.

Because Vazquez has a record of playing head games, Stevenson said he was expecting something, and even though he doesn't necessarily believe Vazquez's intent was malicious, he is still responsible for what comes out of it.

"I knew he was going to do that before," Stevenson said on Monday's edition of The MMA Hour. "He trains with a lot of the same people I train with back at home. It's something I knew he was going to try to do. But I think he messed up. Rather than being a mind game, it became personal. I really will break something if I get the chance."

Stevenson says part of his anger comes from his own personal situation. In addition to the doctored photos floating around online, he also has the weight of a three-fight losing streak on his back. In addition to that, he's cutting to 145 pounds for the first time.

"My intensity picked up," he said. "Probably what you'll notice in this fight is hatred. A lot of times when I fight someone I'm smiling. Generally, I'm in a good mood and trying to be happy. But trying to maintain this weight down here and training extra hard to be here, and losing three fights in a row has definitely made me angry."

Once a UFC No. 1 lightweight contender, Stevenson (31-13) has lost five of his last seven. But he says the rough patch was not as much of a factor in his move to featherweight as his hopes of being a champion.

"Honestly, the cut to 155 was getting really easy," he said. "Right now the cut to 145, believe it or not, I'm only nine pounds out and I haven't started cutting weight. I've just been dieting. As competition got tougher and the intensity of practices picked up, i noticed weight continued to come off. I honestly want a title, and it will be a faster shot to get it at 145 than 155 after three losses in a row."

The three-fight losing streak could have Stevenson on the verge of losing his job, but he says he's looked at every fight as must-win since entering the sport, making this one is no different.

Still just 29 years old, Stevenson believes he has several good years still ahead. His opponent Vazquez is considered one of the top submission artists in the division, with 11 of his 15 victories coming via tapout, but Stevenson said he will not be scared to engage Vazquez anywhere, including the mat.