Falling Action: Best and Worst of Strikeforce - Overeem vs. Werdum 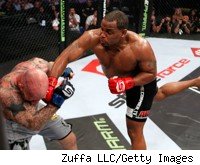 After a long wait and a lot of buildup, the first round of the Strikeforce heavyweight Grand Prix is finally in the books, even if the final fight of the quarterfinal round ended with more of a bizarre whimper than the thunderous bang we'd hoped for.

But now that it's over, who were the biggest winners, losers, and everything in between at Strikeforce: Overeem vs. Werdum? I'm so glad you asked...

Biggest Winner: Jorge Masvidal
He was the only underdog on the main card to pull out a win, and he did it by turning K.J. Noons into something out of 'The Hills Have Eyes.' Right away it seemed as though Masvidal had Noons figured out. Nearly every time Noons went to slip, he slipped right into a Masvidal punch or kick. By the end of the first he was bloodied and dazed. By the end of the second he had a Hominick-esque tumor growing out of his forehead. With the win, Masvidal jumps up to the front of the line in the Strikeforce lightweight division -- or at least he should. Scott Coker stopped just short of declaring Masvidal to be Gilbert Melendez's next challenger, but then again, Coker rarely makes any statement that's 100 percent declarative these days. As long as Melendez is going to face a Strikeforce fighter next, Masvidal ought to be the guy. He's earned it.

Biggest Loser: Fabricio Werdum
It's one thing to pull guard when you've given up hope of getting your opponent to the mat any other way. It's another thing to pull guard and then cling to your opponent like a piece of driftwood in a storm when you're clearly losing on the scorecards. Early on Werdum seemed to be at least trying to set something up off his back. Later in the fight he was content with simply being on the mat, as if Overeem might get frustrated with the lack of action and just armbar himself. The crazy thing is, for the brief moments when he did stand with Overeem, he didn't do so badly. He landed some punch combos and knees, and even put Overeem on the defensive. I can't imagine that he thought he was going to win a decision by flopping onto his back every twenty seconds, so what was he thinking as time ticked away in the final round? Where was the sense of desperation? Overeem may have fought like a man who was trying not to lose, but Werdum fought like a man who was just trying not to get hurt. If the goal was to squander everything he'd gained with the win over Fedor in fifteen minutes or less, that was a great way to go about it.

Most Predictable: Josh Barnett
He had the easiest first round draw in the tournament, and it showed. You put an experienced, savvy grappler up against a green striker like Rogers, and this is what you get. That's not a knock on Barnett. He did exactly what he had to do, and he was smart about it. At the same time, that one went down exactly according to the script, from the fight strategy to the finish, right down to his post-fight monologue about skull-stacking and body-piling. You pretty much know what you're getting with Barnett these days. It's just a good thing that it's still entertaining even when you've seen it before.

Most Impressive in Defeat: Magno Almeida
You could make a compelling case that he deserved to win the decision over Connor Heun, but even in defeat he showed off a dangerous ground game that made the decision to take him down seem like a critical error in judgment. As soon as Almeida's back touched the mat he had had a submission attempt in the works. All Heun could do was hold on and try not to get his limbs snapped. Judging by the look of his elbow by the time he left the cage, he had mixed results in that department.

Least Impressive in Victory: Alistair Overeem
He's right that it takes two to tango, and Werdum didn't even want to step on the dance floor. At the same time, Overeem was either too winded or too conservative to try anything late in the fight, and as a result he ended up contributing to the poor showing through his own inaction. I'm not saying he should have gotten into a grappling match with Werdum, but there were times when he seemed glad just to get a chance to rest in the Brazilian's guard. Maybe it was ring rust. Maybe he just wanted to play it safe and move on into the semis. Or maybe that "40 pounds of whoop-ass" comes at a price, and Overeem was still paying it while he huffed and puffed his way through the post-fight interview. He might still win this whole thing and shut us all up, but he didn't convert a lot of new believers on Saturday.

Most Surprising: Daniel Cormier
Most people expected him to win, but I don't think many of us expected him to play the bongos on Jeff Monson's head for three rounds. Cormier's stand-up skills have improved dramatically in the past year or so. Did I even see a headkick or two thrown in there? Not that Monson is known for his skills as a boxer, but Cormier put on a clinic. In the process he showed that he's not simply a great wrestler -- he can also put on a show. Monson hung tough under some heavy punishment (the man's only been knocked out twice in over fifty fights), but I don't think that should be seen as a sign that Cormier can't finish. The only thing I wonder is how a 5'10", 240-pound heavyweight will stack up against some of the monsters in this division. If he keeps winning, Cormier is going to have to find out sooner or later.

Least Surprising: Valentijn Overeem
When he's winning, he's a holy terror. As soon as the tide turns against him, he's flagging down the waiter and asking for the check. You want to know why the man has a career record that's barely over .500? It's not a lack of physical talent; it's because he quits when things aren't going his way. He's done it before, and he did it again when Chad Griggs put some leather on him. His response after the loss tells you that maybe this is a fighter who has gotten a little too used to losing.

Fighter Least Likely to Fade Out Quietly: Chad Griggs
Strikeforce still seems unsure what to do with this guy. He threw a wrench in the works with his win over Bobby Lashley, then beat up Gian Villante and now Valentijn Overeem. I can't think of any other Strikeforce fighter who has racked up a three-fight win streak like that with less fanfare. Strikeforce doesn't seem all that interested in promoting him, yet he won't go away. He just keeps showing up and punching people in the face. Now that he's won more Grand Prix reserve bouts than any other participant has won actual tournament bouts, perhaps he's earned a little more of a push. A fight with fellow reservist heavyweight Cormier makes the most sense now. Plus, it just sounds like a lot of fun.