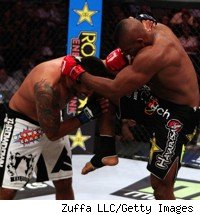 Two days after winning a unanimous decision victory over Fabricio Werdum that left most MMA fans disappointed, Alistair Overeem shrugged off any criticism of his own fighting style in an appearance on The MMA Hour, saying it was Werdum's approach to the fight that prevented much action from happening.

"I won the fight but I was not satisfied," Overeem said. "I didn't get a KO. I worked hard, and when i look at the fight, I did dominate him. I stuck to the game plan but you have to give credit to Fabricio -- he was prepared. He was not going to get suckered into my game, which is the stand up, and he got me out of my game. His takedowns were not successful, but I think he trained hard for this fight, he really wanted to win. I felt his power and he was there to win."

However, while Overeem said he understood Werdum's strategy in the fight, he dismissed those observers who said that Werdum landing more strikes in the bout meant that Werdum actually deserved to win the decision. According to Overeem, the strikes Werdum landed were just a minor annoyance.

"I'm not impressed with his striking," Overeem said. "He does not hit hard. He was using his strikes to set up his takedowns, but there was no damage. I was annoyed. ... When you look at a fight, who's more dominant? You can see who's more dominant."

Werdum's basic game plan was to get the fight to the ground any way he could, whether that meant attempting a takedown, pulling guard or just flopping on his back. Overeem says he doesn't respect that.

"That is stalling the fight, or sort of withdrawing from the fight," Overeem said. "That basically slowed down the fight and kept anything from happening. ... Of course I expected him to pull guard, but I didn't expect him to do it like 30 times."

As for his future, Overeem said he thinks he'll be ready to fight Antonio Silva in a few months, and he plans to move from his home in the Netherlands to the United States as his MMA career progresses.

"This is where all the action is happening," Overeem said. "I like it here and I think I have to be here."

And further into Overeem's future, he hopes, is a clash with the UFC heavyweight champion. We don't yet know who that will be after the Strikeforce Heavyweight Grand Prix is concluded, but Overeem said he expects Cain Velasquez to beat Junior dos Santos, and he said he'd love it if he got a chance to fight the UFC champ eventually.

"If the fans want to see it," Overeem said, "they've got to make it happen."