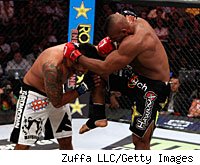 We tuned in to Showtime on Saturday night wanting to see Alistair Overeem come out swinging wild haymakers, throw vicious knees in the clinch, and demolish Fabricio Werdum. We wanted Overeem to continue to look like the unstoppable force he's looked like in the last couple of years, both in MMA and K-1, and maybe make a case that he's the best heavyweight fighter in the world.

Instead, Overeem came out and fought somewhat cautiously, not wanting to fall into any of Werdum's many traps on the ground, and he won a one-sided unanimous decision. And we were disappointed.

Overeem is a great, great fighter -- undoubtedly one of the best in the world. No one should dismiss the quality of the performance he put on against a good opponent in Werdum on Saturday night. And yet it also felt as Overeem walked out of the cage in Dallas like he had missed an opportunity to prove that he's not just one of the best, but the very best.

Again, this is not meant as a criticism of Overeem: Werdum is one of the top heavyweights in MMA, and Overeem beat him handily. But there's been a buzz growing over the last couple of years, as Overeem has grown ever more muscular and looked all but unbeatable, that the Demolition Man was the perfect fighting machine, that no one could possibly last 15 minutes in the cage with him. We didn't see that superhuman Overeem on Saturday night. We saw a very good fighter, certainly. But not a world beater.

Heading into Saturday night, I considered Cain Velasquez and Junior dos Santos the top two heavyweights in MMA, but I was hoping Overeem might do something to change my mind. If Overeem could knock out Werdum even more savagely than dos Santos did in 2008, maybe we could make the case that Overeem deserved to be considered the true king of the heavyweights.

Now I think it's even clearer than before that Velasquez and dos Santos are a step above the rest. The Overeem-Werdum fight was a skillful display between arguably the sport's best striker and arguably the sport's best grappler, and it was the most significant victory over Overeem's MMA career. It was not, however, nearly as impressive a performance as Dos santos's win over Shane Carwin, or Velasquez's win over Brock Lesnar.

Overeem will now move on to the next round of the Strikeforce heavyweight tournament, where he'll face Antonio "Bigfoot" Silva in what should be a tremendous fight. I'm already excited about seeing that one.

But when Overeem and Bigfoot step into the cage, they'll be fighting for the No. 3 spot in the heavyweight rankings. Velasquez and dos Santos are the two best.


Notes from Strikeforce
-- Werdum should have been docked a point, or at least warned by the referee, for stalling: Werdum's tactic of flopping onto his back and then taking his time when the referee told him to stand back up is a foul, and the ref was wrong not to enforce it.

-- The first fight of the undercard, a split decision win for Isaac Vallie-Flagg over Brian Melancon, was a good example of a good fight by regional MMA standards -- but not by the standards of the UFC, which are the standards fans should expect from Strikeforce now that both promotions are under the Zuffa banner. The fight was entertaining at first, with good back-and-forth exchanges and plenty of action, but after a few minutes both men started to tire out, and by the end of the fight it felt like neither man had anything left. Vallie-Flagg and Melancon put on a reasonably good show, but neither one of them is really at Zuffa level, at least not yet.

-- Strikeforce and HDNet really dropped the ball with the pacing of the undercard. Initially, there were supposed to be five fights in HDNet's two-hour broadcast window. That's doable, but you have to hustle to get it all in. Unfortunately, they didn't hustle, and when the first three fights all went to decision, they decided to move up the HDNet main event (JZ Calvan vs. Justin Wilcox) and push back Todd Moore vs. Mike Bronzoulis until afterward, so that it wouldn't be televised. As it turned out, Calvan vs. Wilcox ended in plenty of time for Moore vs. Bronzoulis to make it on the broadcast, but they didn't show it anyway. The whole thing was a mess.

-- According to CompuStrike, Chad Griggs landed 28 strikes in the 66 seconds he was on the ground with Valentijn Overeem. Overeem had no answer for Griggs, and his performance was, frankly, embarrassing.

Quotes from Strikeforce
-- "I think one fight might go to a decision. The rest, all of them, could be knockouts or submissions." -- Bas Rutten at the outset of the HDNet undercard broadcast. In reality, not a single one of the HDNet fights ended in a knockout or submission.

-- "I have no doubt in my mind that the winner of the Strikeforce Grand Prix tournament will be the greatest heavyweight fighter on the planet." --Frank Shamrock. Shamrock may think so, but the vast majority of MMA fans and media members will consider the UFC heavyweight champion to be the No. 1 heavyweight in the sport.

"Fabricio is one of the best grapplers in the world -- I consider him the best grappler in MMA. So we don't want to play with him on the ground," Alistair Overeem. That cautious approach of avoiding going to the ground with Werdum was smart from a tactical standpoint, but fight fans don't tune in to an Overeem fight hoping to see caution.

Good Call
-- Say what you will for Josh Barnett, but he knows how to promote himself -- and knows he's better in the cage afterward with the microphone in his own hand than he is being interviewed by Gus Johnson. So Barnett made the call to take things out of Johnson's hands and just give a post-fight soliloquy rather than a post-fight interview.

Bad Call
-- Referee Leon Roberts was too close to the action and too slow to react during the Conor Heun vs. Magno Almeida fight: When Heun shoved Almeida to break free from a clinch, Almeida fell back into Roberts, knocking him on his butt. If you're going to be a ref, you need to be aware of where you are in relation to the fighters and nimble enough to get out of the way.

Stock Up
-- Jorge Masvidal looked sensational in his unanimous decision victory over KJ Noons. I was skeptical before Saturday night about whether any Strikeforce lightweights were worthy of stepping into the cage with the promotion's champion, Gilbert Melendez, but after seeing that fight I now think a Masvidal-Melendez fight would be a good one.

Stock Down
-- Brett Rogers desperately needs to change up his training and get with a real camp that can teach him to be a complete mixed martial artist. Rogers has already gotten as far as he's going to get just by being a hard puncher. If he's ever going to progress to the next level, he needs a good coach to break him out of his bad habits and build him back up, with a real ground game and diversified striking. If Rogers doesn't move to a new camp, that tells us he's satisfied with his 2009 upset of Andrei Arlovski being the signature win of his career.

Fight I Want to See Next
-- I'm excited about Overeem vs. Silva. But the fight I'm most excited about now is dos Santos vs. Velasquez. That's where we'll see who's really the best heavyweight in the world.