Josh Barnett: 'Give Me My Moment, and I'll Give You What You Want' 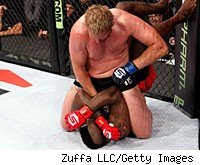 DALLAS -- There was hardly a moment in Josh Barnett's Strikeforce heavyweight Grand Prix quarterfinal bout with Brett Rogers where he wasn't in the driver's seat, so it was only fitting that he seized control of the post-fight interview as well.

"Gus, I love you. I know you have a job to do," Barnett told Showtime commentator Gus Johnson in the cage following his second-round arm-triangle submission victory over Rogers. "But then again so do I, and I think the people want to hear what I have to say right now."

What followed was yet another monologue from Barnett about the state of his career and his future goals, only this one also included references to stacking up skulls and "standing on top of a pile of bodies with gold in [his] hand."

This, Barnett said in the post-fight press conference, is the kind of thing we should all just get used to now that North American MMA has an entertainer like him back in the big leagues.

"I'm not here to do everything that everyone tells me to," Barnett said. "I'm here to entertain. I don't need my hand held. I don't need to be directed. I don't need to have anybody try to prompt me to give something interesting. Just give me my moment, give me my time, and I'll give you what you want and then some. People want to hear what I've got to say, and if anybody wants to see how I finished the fight, hit rewind on the DVR. You can check it out as much as you want."

Barnett had little trouble dispatching the less experienced Rogers after taking him down easily in both the first and second rounds. Even with a dominant position for most of round one, however, he said he had to be careful not to get too reckless looking for the finish and, in the process, put his chances of continuing on in the tournament at risk.

"You go in there, you have a strategy. I stuck to it for the most part, but once I got in there it became a matter of also making him drown underneath me -- taking his wind, taking his spirit, taking his energy, and doing it without any sort of injury, because this is a tournament. I have another fight, and I have another fight after that, so it's important to be very tactical and very strategic about how you take these guys out."

But Barnett's strategic approach wasn't an immediate hit with the Texas fans, who booed his first-round performance. That made for a somewhat inauspicious start for a fighter who prides himself on being such a showman, but Barnett insisted that it never bothered him.

"You can't listen to the crowd very much. You got to go out there, you got to do your thing. And you know what? The crowd can boo you one minute and cheer you the next," he said.

Now Barnett moves on to face Russian striker Sergei Kharitonov in the semi-final round in the fall. Kharitonov fought his way in with a knockout win over Andrei Arlovski in his quarterfinal fight, and Barnett expects him to be a tougher opponent than Rogers, he said.

"[Kharitonov] is a more well-rounded fighter. He's a much better boxer. In terms of technical, very sound boxing technique. I don't know if he's got the slugging ability -- in fact, I think Brett might actually be a little bit faster than Sergei, to a point -- but Sergei has a chin of granite. He's got a better ground game too, so I've got to train hard."

For Barnett -- who's had a rocky few years after a positive drug test torpedoed his hopes of a high-profile fight with Fedor Emelianenko in the now defunct Affliction organization -- the Strikeforce Grand Prix represents a golden opportunity. Not only does it give him the chance to prove himself as a top heavyweight, it also offers him some hope of mending fences with UFC president Dana White now that the UFC's parent company, Zuffa, owns Strikeforce.

It's a chance he may never get again if he squanders it this time, and no one seems more aware of that fact than Barnett.

"This is my chance," he said. "This is my triple crown. This is my WGP. This is my opportunity to go out there and display myself as one of the best heavyweights who's ever walked the earth. I know it, but people want to see it. They want me to prove it. Fine. As long as you can line people up against me, I'm going to go out there and keep taking them out. That's my job. I'm born and bred to fight. So anybody that thinks they want to kick my a--, make them sign so I can go prove them different."