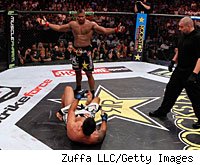 DALLAS -- Alistair Overeem and Fabricio Werdum couldn't agree where their Strikeforce heavyweight Grand Prix fight would be contested on Saturday night. Overeem voted in favor of the feet. Werdum wanted it on the mat. In the end, neither man got exactly what he was hoping for, and neither did the fans.

Overeem, the reigning Strikeforce heavyweight champion, won a unanimous decision after three rounds at the American Airlines Arena. He mostly dominated the striking portions of the fight early on and easily stuffed Werdum's takedown attempts in the first round, but the Brazilian Jiu-Jitsu specialist Werdum continually flopped to his back in an attempt to turn the bout into a ground battle, frustrating Overeem down the stretch.

"I think he didn't really come to fight," Overeem told MMA Fighting after the bout. "He was stalling a lot. In the beginning he opened up his guard, so I could stand up. Later on he kept his guard closed, so I couldn't stand up. Then he was just stalling the fight."

Werdum wasn't wholly outclassed in the striking game when he did deign to stay on his feet, however. He peppered Overeem with punch combinations and knees throughout the fight, but Overeem insisted he was never hurt by any of the blows, and said he was disappointed that Werdum opted to spend so much time on his back throughout the fight.

"Basically I think that's all he can do," Overeem said. "I think he didn't really come to fight. He just set-up his strikes to get the takedown. He wasn't striking to knock me out. What can I say? It takes two to tango."

With the decision victory, Overeem advances into the semi-final round of the Strikeforce Grand Prix, where he'll face Antonio "Bigfoot" Silva in an event that Strikeforce CEO Scott Coker said would most likely take place some time this fall.

And while Coker admitted that Saturday's main event wasn't exactly the biggest hit with the fans, who showered Overeem and Werdum with boos throughout the fight, he refused to lay blame on either party for it.

Overeem landed heavy right hands and knees to Werdum's head at several points in the fight, but it was difficult to tell just how badly Werdum was hurt, since he was always willing to fall to his back after any exchange in the hopes that Overeem would follow him down. On more than one occasion he beckoned the 260-pound Dutchman down, even putting his hands together in a pleading motion at times. Overeem, however, refused to take the bait, remaining on his feet and taunting Werdum for his unwillingness to engage.

For his part, Overeem blamed Werdum's strategy for making both men look bad in front of the fans in attendance and those watching at home on Showtime, but said it wasn't indicative of his abilities, as people will soon realize.

"I can tell you, there's a lot more that I can show to the fans," said Overeem. "When the fans look at my previous fights, they will know that. It's hard when somebody comes to not fight. I knew that that chance was there with Fabricio Werdum. He is a character. But I did expect him to put more of a fight against me. He was talking a lot of crap before the fight, but yeah, I believe he was not there to fight."