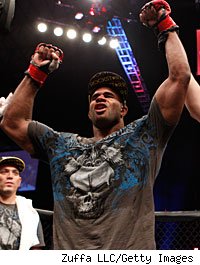 Alistair Overeem defeated Fabricio Werdum in the main event of Saturday night's Strikeforce event in Dallas, winning a unanimous decision and showing why nearly everyone agrees that he's the best heavyweight fighting under the Strikeforce banner.

Overeem did not, however, blow Werdum away, the way many expected him to. Instead, he fought a safe and cautious fight and won a unanimous decision. The judges scored it 30-27, 30-27 and 29-28 for Overeem, who defended his performance afterward.

Werdum appeared to get the better of the first striking exchange, but when he shot for a takedown, Overeem easily avoided it. It became clear within the first minute of the fight that Werdum would continually go to the ground and attempt to take advantage of his superior Brazilian jiu jitsu, while Overeem would insist on keeping it standing. Several times in the first round Werdum went to the ground and tried to engage there, and every time Overeem would do his best to keep the fight standing. Most of the first round was fought on the feet, and Overeem was getting the better of the exchanges, and so Overeem won the first round.

In the second round Werdum tried even harder to keep the fight on the ground, including stalling several times by going to the ground and staying there for a few extra seconds when the referee ordered him to stand back up. Overeem did end up on the ground inside Werdum's guard for two extended periods of time, but both times Overeem stayed out of trouble. Overeem also landed some hard knees and clearly got the better of the striking exchanges.

Werdum, seeming to realize he was losing the fight, came out strong in the third round and became more aggressive in the striking exchanges. Overeem held his own, however, and as the round wore on it appeared that he was going to be satisfied to win a decision. Late in the third round Overeem and Werdum became tangled on the ground, but Werdum never came close to threatening Overeem with a submission until the last couple of seconds of the fight, when he tried a desperation knee bar.

At the end of the fight the fans in Dallas loudly booed: They came to see a wild heavyweight brawl, and what they instead saw was a contrast in styles that featured some displays of great skill but not a lot of excitement.

With the victory, Overeem improves to 35-11 in his MMA career, and he'll next take on Antonio "Bigfoot" Silva in the second round of the Strikeforce Heavyweight Grand Prix.