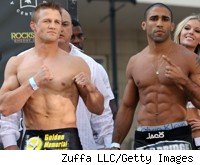 DALLAS -- This is the Strikeforce undercard live blog for all five of tonight's Strikeforce: Overeem vs. Werdum preliminary bouts at the American Airlines Center in Dallas, Texas.

Round 1: Round 1: They charge out to meet each other in the center of the cage. Head kick from Wilcox and a nice left hook from JZ. Body kick by JZ and Wilcox catches the foot and takes him down with it, but JZ won't stay there. He scrambles up and eats a hard knee to the head from Wilcox right when he gets to his feet. Wilcox moves in with a three-punch combo, stinging JZ with a left hook at the end. Wilcox drops under a JZ right hand and tries for a takedown, but can't finish it. They're both busy on the feet, but Wilcox seems to be landing the more significant blows. His corner implores him to get a takedown on JZ in the final minute to win the round. Nice front kick to the chest by Wilcox. Wilcox shows no interest in getting that takedown, but he's doing just fine on the feet. MMA Fighting scores it 10-9 for Wilcox.

Round 2: Sharp right hand to start the second by Wilcox. He's doing a good job working his way in with the left and then following with the right. Wilcox comes in and then stops and turns around sharply, crumpling to the mat holding his eye. Replay confirms that he got poked by JZ's out-stretched hand, and he is in a lot of pain, writhing around on the mat now. "No foul," says the referee, which seems odd considering what we just saw. Perhaps he just means it wasn't intentional? The doctor comes in and takes a look at Wilcox. She quickly concludes that he's in no position to continue, and a very worried Wilcox follows her out of the cage and into the locker room. Disappointing end to a much anticipated fight.

"JZ" Cavalcante and Justin Wilcox fight to a no decision (bout stopped due to eye poke) at 0:31 of round two.


Round 1: They trade inside leg kicks to start. Heun ducks under an Almeida jab nicely and puts him down with a slam. Almeida is very active off the bottom right away, rolling in search of a knee or ankle and forcing Heun to defend from the top. Almeida looks for a footlock, but Heun uses a hammer fist to make him release it. Almeida rolls up and puts Heun on his back in the scramble. Heun goes right to rubber guard and nearly has an arm, but Almeida slips out and goes to work from the top. After a stand-up that the fans don't agree with, they trade kicks on the feet in the final minute. Heun sports a bloody nose as the horn sounds to end the first. MMA Fighting scores it 10-9 for Almeida.

Round 2: Heun tries a kick to the body and Almeida chases him back against the cage with a punch combo. They end up in the clinch with Heun working knees to Almeida's thigh. Heun seems to be trying for a throw, but Almeida stops it and punishes him with a knee to the body. Heun shoves Almeida off and right into the referee, who tumbles to the mat. The crowd goes wild. Heun tries another throw, and doesn't get it but stays after it and puts Almeida down. Again there's that active guard of Almeida's, and in no time he has an armbar locked up. Heun rolls and tries to hang on. Almeida is cranking on it, but Huen's elbow appears to be out of the danger zone. He hangs in there and winds up on top in a kind of reverse backmount before the horn. MMA Fighting scores it 10-9 for Almeida.

Round 3: Almeida comes forward with somewhat weary-looking arm punches, forcing Heun back. Almeida throws more, but every punch Heun throws is a big one. Heun drops down for the takedown and gets it, but again Almeida has him in trouble right away off his back. He locks up an armbar and forces to Heun to try and roll out of it, giving up top position in the process. Heun survives, but moments later Almeida locks up a D'arce choke from the bottom. Heun stops him from getting his hips into it and eventually slips out. Heun opens up with punches and elbows from Almeida's guard in the final minutes. Almeida's too tired to offer much defense, but Heun is a little too tired to put much into the blows, though he does land a nice Sakuraba-style double-punch to Almeida's head. Almeida rolls for one more armbar, but runs out of time. MMA Fighting scores it 10-9 for Heun.

Round 1: They trade left hooks right off the bat. Burrell comes charging in for a takedown and eats a jab, but gets in close anyway and lifts Ray up for a slam. Burrell stands up out of the open guard in an attempt to pass, but Ray replaces the open guard and uses some elbows off his back. Ray thinks about an arm, then a heel hook. Burrell collapses back down on top and Ray nearly snags a kimura. Ray stays calm, escapes, and passes to half-guard. Back in full guard, Ray very nearly gets an armbar, but Ray gets out and punishes him with a hammer fist. Ray scrambles up to his feet looking for a standing kimura, and he uses it to flip Burrell over and comes very close to an armbar. Burrell escapes again, but just barely, and finishes on top. MMA Fighting scores the round 10-9 for Ray.

Round 2: Burrell comes with a hard left hook-right straight combo, and Ray whiffs on a spinning backfist. Burrell is starting to find his range with his jab, popping Ray twice in a row with stiff shots. Burrell with a takedown, and Ray is less active on the bottom this time. Ray tries to work up and Burrell puts him back down, but he doesn't do enough from the top and ends up getting stood up by the referee. Burrell is winning the stand-up, but he continues to want to take it down even though Ray's best work has been off his back. Another takedown by Burrell, and Ray is starting to look a little weary. He tries a heel hook when Burrell stands out of his guard, but Burrell spins out and ends the round with a front headlock. MMA Fighting scores the round 10-9 for Burrell.

Round 3: Ray's corner is imploring him to throw more punches, but it's Burrell who's the more active on the feet. Ray is throwing one tired jab or kick at a time, and then trying for the spinning backlist that hasn't been there for him at all, but which he has never abandoned all night. Ray moves in and gets himself taken down again, but soon works back to his feet in the clinch. Ray traps Burrell's arm and trips him down, but somehow still ends up on bottom. Burrell gets a little overeager with the top position and nearly gets caught in a guillotine, but Ray can't get his hips into it enough to finish. He scrambles back up only to have Burell put him back down. Ray's corner shouts that he's giving up. But then, they haven't exactly been supportive so far. Burrell lets him up in the final seconds, but Ray is slow to rise. The horn sounds at last. MMA Fighting scores it 10-9 for Burrell.

Round 1: The first two fighters on the night touch them up. Vallie-Flag tries some kicks to the legs and body, and Melancon responds by unloading with some big hooks. Vallie-Flag seems to be reeling a bit, and the hooks keep coming. Melancon flips him to the mat and locks up a crucifix position in side control, working short punches to Vallie-Flag's face.Vallie-Flag turtles up and Melancon nails him with hammer fists before slipping his hooks in and looking for a rear naked choke. It isn't there, so he takes mount. Vallie-Flag stays calm, recovers position and works to his feet. Both men looking tired now. Big uppercut from Melancon is answered by a stiff jab from Vallie-Flag They punch their way into the clinch for a little breather, then end the round with each man landing a couple nice blows. MMA Fighting scores it 10-9 for Melancon.

Round 2: Melancon looks a little slower to start the second. He did expend an awful lot of energy in that first round. Vallie-Flag bounces around and sticks him with jabs and kicks. Takedown for Vallie-Flag, and in his corner Keith Jardine shouts that Melancon is "done." Melancon's not that tired yet, because he bounces back up in a hurry and works some knees from the clinch. The pace has slowed noticeably after the whirlwind first round. Vallie-Flag backs up and hurls out a nice punch combo that stings Melancon. After a period of inaction the ref separates them. Vallie-Flag comes right back at Melancon with a double-jab followed by a looping right that lands. Melancon looks for a takedown, but it isn't there. Vallie-Flag thinks about one, but gets mired in the clinch. After another restart they both open up in the final minute, but Vallie-Flag ends the round suffocating Melancon in the clinch again. Now both guys are good and tired. MMA Fighting scores the round 10-9 for Vallie-Flag.

Round 3: Vallie-Flag is the less exhausted of the two to start the final frame. He tosses out a kick and a jab, still bouncing around. Melancon rushes in for a takedown attempt, but settles for a clinch against the cage. Vallie-Flag separates and throws a nice short elbow, but Melancon soon closes the gap again. Nice belly-to-belly throw by Melancon and he's into side control. Vallie-Flag tries to scramble up, but ends up giving up the mount. He frees his hips quickly and scrambles to his feet, but it doesn't take long before we're back in the clinch. They trade short punches in close, but the ref isn't pleased with the work rate. He separates them, only to have them get back in the clinch almost immediately. One more restart, and Vallie-Flag throws a leg kick that leads to a takedown for Melancon. That could well be the clincher here in the final seconds. MMA Fighting scores the round 10-9 for Melancon.

The crowd isn't happy about seeing the Texas fighter lose the close decision.