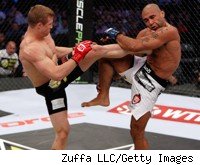 What looked on paper like a highly entertaining fight between Gesias Cavalcante and Justin Wilcox turned into a major disappointment on Saturday night's Strikeforce card, as Cavalcante accidentally poked Wilcox in the eye in the second round, causing the fight to end in a no decision.

The eye poke wasn't dirty, it was just an unfortunate occurrence: It came when Cavalcante had his hand extended and Wilcox charged forward, and Cavalcante's right ring finger appeared to go straight into Wilcox's right eye. Wilcox immediately screamed in pain and rolled on the ground holding his eye, and when the doctor came into the ring to examine him, it was clear that his vision was affected and it wasn't safe for him to go on. The official time of the end of the fight was 31 seconds into the second round.

The ending was particularly disappointing for HDNet, which decided to televise the undercard before Showtime's broadcast of the main card in large part because of the Cavalcante-Wilcox bout, which should have been the best fight on the undercard. Between this no contest and the fact that KJ Noons vs. Jorge Masvidal got moved up from the undercard to the main card, HDNet ended up getting the short end of the stick.

Wilcox and Cavalcante are both solid lightweights who are capable of putting on good shows, and it would be nice to see them settle things the right way. Strikeforce should book a rematch as soon as possible, and help fans get the bad taste of this bout out of their mouths.