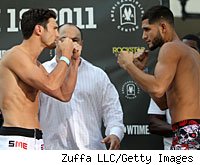 DALLAS -- This is the Strikeforce live blog for K.J. Noons vs. Jorge Masvidal, a lightweight bout on tonight's Strikeforce: Overeem vs. Werdum card at the American Airlines Center in Dallas, Texas.

Round 1: Noons comes charging across the cage and Masvidal checks his progress with a leg kick. Big overhand right from Masvidal, followed by a glancing knee to the head. Noons stays on him, backing him up against the cage, but unable to pin him down. Masvidal is doing a good job of predicting where Noons' head is going to be and meeting it with a punch. Noons ducks under a punch and eats a knee from Masvidal. Masvidal drops down for a takedown and gets it. Noons works for a kimura up against the fence, but eventually has to give up on it so he can work to his feet. Another knee to the head from Masvidal and Noons is bleeding from his forehead. The cut is causing a mess around his eyes. Masvidal drops Noons with a kick as he goes to slip a punch. Masvidal jumps on the stunned Noons and hammers him with right hands. Noons turtles up and avoids the choke, but barely survives the round. MMA Fighting scores it 10-8 Masvidal.

Round 2: Masvidal slips out of the way of a Noons punch and lands a nice left. Noons, to his credit, is still coming forward with punches and elbows. Masvidal gets a takedown, despite Noons' attempt to hold the fence, but can't keep him down. Noons' forehead is swollen badly now right over his eye. Another takedown for Masvidal and some nice elbows on the ground. Noons gets his back on the fence and works back to his feet. He's still agressive, even though he's starting to look a little Quasimodo-ish. Masvidal goes for another takedown and Noons gets warned a few more times to grabbing the fence. Noons turns the tables and gets Masvidal down on his back for some punishment, but Masvidal gets back up and lands a good knee before the round ends. MMA Fighting scores it 10-9 Masvidal.

Round 3: Noons is stalking Masvidal to start the third, and Masvidal keeps slipping away from him. Noons' face is lathered in blood now, and his forehead has a lump the size of a baseball on it. Masvidal shoots for a takedown and Noons gets another warning about grabbing the fence, but this time I actually don't think he did it. Spinning back kick from from Masvidal, but he seems like he's less aggressive than Noons now, though still roughly as effective. Takedown for Masvidal, but Noons is back up quickly. Masvidal puts him down again and ties up an arm, but can't let loose with anything significant. Masvidal keeps Noons firmly on the mat, and he seems content with riding this one out to a decision. Noons is bloodied and battered when the horn sounds. MMA Fighting scores it 10-9 for Masvidal.