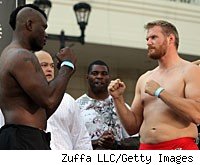 DALLAS -- This is the Strikeforce live blog for Josh Barnett vs. Brett Rogers, a heavyweight bout on tonight's Strikeforce: Overeem vs. Werdum card at the American Airlines Center in Dallas, Texas.

Barnett (29-5) is fighting on American soil for the first time in over two years. Last year Barnett defeated Mighty Mo at Dream.13 and Geronimo dos Santos at Impact FC 1. Rogers lost his last two Strikeforce fights and last October took a win over Ruben Villareal at a W-1 event in Canada. In this tournament bout, the winner will advance to meet Sergei Kharitonov in the semifinals at a later date.

Round 1: Rogers tosses out the jab to try and keep Barnett at a distance, but Barnett wastes no time shooting in low and picking that foot. Barnett presses Rogers against the fence and scoops him up high for a big slam. That's a lot of weight coming down on this mat. Barnett gets side control and looks to isolate and arm, but Rogers nearly scrambles out and forces Barnett to start again. Barnett stays on top and works into the full mount. Rogers has his arms locked around Barnett's waist, but that's not going to help much. Barnett works a few short punches and elbows from the top, but he's clearly submission-minded. Barnett gets too high in the mount and allows Rogers to buck him and slip out the back door. That escape is short-lived, however, as Barnett quickly regains the mount with less than a minute left. Barnett tries for an Americana, but settles for a few more punches before the horn as the fans voice their displeasure. MMA Fighting scores it 10-9 Barnett.

Round 2: Rogers is right back to trying to work that jab from a distance, but it's completely ineffective at keeping Barnett at bay. He leaps in with a left hook that lands, then ties up and throws Rogers, essentially landing back in mount. The crowd is already antsy, but Barnett gets their attention by locking up an arm triangle choke from the top. He doesn't even need to jump over to the side to finish it. He just squeezes and Rogers taps. Dominant, precise performance from Barnett.

Josh Barnett def. Brett Rogers via submission (arm triangle) at 1:17 of round two

Barnett seizes the microphone from Gus Johnson in the post-fight interview and delivers a monologue about stacking skulls and standing atop a pile of bodies. Easy night of work for Gus.