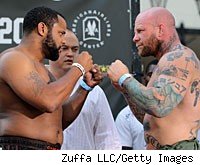 DALLAS -- This is the Strikeforce live blog for Daniel Cormier vs. Jeff Monson, a heavyweight bout on tonight's Strikeforce: Overeem vs. Werdum card at the American Airlines Center in Dallas, Texas.

Cormier (7-0) won in January against Devin Cole via unanimous decision. A 14-year veteran of the sport, Monson (42-11) will look to put Cormier to the test and extend his own win streak to nine.

Round 1: They trade somewhat awkward punches in the opening feel-out period, then Cormier presses forward into the clinch and lands a couple decent knees to the body and a nice short elbow to Monson's head. Cormier getting a little more confident with his hands, but Monson gets in close and Cormier ties him up. Cormier tosses Monson off him and nearly trips him, then goes back to work with his hands. Monson is already bleeding on the top of his forehead and under his left eye. Cormier tags him with another nice combo, his confidence visibly growing with every blow he lands. Monson takes it and fires back a couple of his own. Nice left hook to the ear by Cormier at the end of an exchange staggers Monson. These two big grapplers are throwing heavy leather tonight. The round ends with each man waiting for the other to go first. MMA Fighting scores it 10-9 for Monson.

Round 2: Cormier mixes it up with an inside leg kick followed by a head kick. Cormier hammers Monson with short punches in close. Monson goes down after missing with a looping right. Cormier doesn't try to follow him down, but instead seems totally content to keep banging it out on the feet. Cormier misses with a head kick, but just barely. Monson ties him up, but Cormier unloads with a three-punch combo once he gets free. Monson lands back, but he's only managing one or two for every four or five that Cormier tags him with. Cormier ties Monson up against the fence and gets the double underhooks, but seems uninterested in even attempting a takedown right now. He's much more content to pound away with hooks in close, though he's showing signs of tiring just a little. Leg trip takedown by Cormier in the last thirty seconds, but he doesn't quite finish it. MMA Fighting scores it 10-9 for Cormier.

Round 3: They shake hands to start the final round. This has been a bit of a messy one so far. Cormier shows off his agility with kicks off either leg, one right after another. Cormier gets off with a left hook to start a brutal three-punch combo, every one of them stinging Monson. Cormier keeps on him, hammering him with one combo after another. Monson's looking weary, and he stumbles down, but Cormier lets him up. They tie up in the clinch after a Superman punch by Cormier. Cormier gets space and bangs Monson with a hard right to the ear that has Monson hurt. Cormier presses into the clinch for a breather, then extricates himself with a leg trip that sits Monson down. They end the round with Cormier thoroughly in control, but Monson hanging as tough as ever. MMA Fighting scores it 10-9 for Cormier.