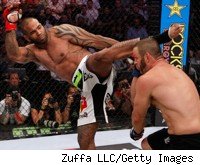 DALLAS -- This is the Strikeforce live blog for Chad Griggs vs. Valentijn Overeem, a heavyweight bout on tonight's Strikeforce: Overeem vs. Werdum card at the American Airlines Center in Dallas, Texas.

Valentijn (29-25), the older brother of Alistair Overeem, was victorious in February by beating Ray Sefo via neck crank at Strikeforce: Fedor vs. Silva. Griggs (10-1) also won in February, stopping Gianpiero Villante in a slugfest.

Round 1: Griggs is walking Overeem down to start, a head kick buzzes his hair a little shorter just to give him something to think about. A half-inch lower and that might have been a problem. Griggs gets the clinch and tosses Overeem onto his back. Overeem tries what looks like a modified Americana off his back, but Griggs shakes his head no. Griggs gets his hands free and unleashes a brutal stream of punches. Overeem rolls over onto his stomach, offering no resistance. Griggs is keeping the pressure on, and Overeem seems to have quit on this one. Griggs pounds away at the uncovered parts of Overeem's face, and Overeem looks as though he may be tapping. The ref jumps in and pulls him off, and this one is over.

Chad Griggs def. Valentijn Overeem via TKO (punches) at 2:08 of round one