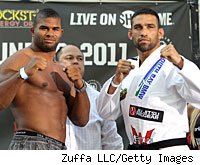 DALLAS -- This is the Strikeforce live blog for Alistair Overeem vs. Fabricio Werdum, a heavyweight bout on tonight's Strikeforce: Overeem vs. Werdum card at the American Airlines Center in Dallas, Texas.

Overeem (34-11) is the Strikeforce heavyweight champion and last year stopped both Brett Rogers and Todd Duffee. Werdum (14-4-1) is coming off a career-defining win one year ago over Fedor Emelianenko. In this non-title tournament bout, the winner will advance to face Antonio Silva in the Strikeforce Grand Prix semifinals at a later date.

Round 1: Werdum starts us off with a head kick that Overeem ducks under. Werdum tests the distance with a two-punch combo, then shoots for his first takedown 45 seconds into the fight. Overeem stuffs it easily. Two more takedown attempts also fail, with Werdum not even coming close. He's not setting up the shots at all, which doesn't help. Overeem catches a Werdum kick and tosses him to the mat, but no way is he following him down. Overeem moves in close for a punch and Werdum pulls guard. Overeem stands up and backs away, and this scenario repeats itself a few moments later. The second time Overeem backs up with his hands in the air, taunting Werdum. Werdum gets up and lands a decent punch combo followed by a knee, but Overeem is unfazed. Overeem sits Werdum down with a big left hook, then steps back and takes a look at his hand. Werdum now literally begging Overeem to come down, but nothing doing. Werdum pulls half-guard just before the horn, but can't get anything going. MMA Fighting scores it 10-9 Overeem.

Round 2: Overeem whiffs on a right hand lead. Werdum punches his way into the clinch and looks for a takedown. Overeem tosses him to the mat again, but won't follow him there. Werdum lands a nice right hand and actually manages to put Overeem down. He's back up quickly, but he eats a hard knee that wobbles him just a bit. Werdum smells blood and comes in swinging, but Overeem stays calm and recovers. More guard-pulling from Werdum, and he's slower and slower to get up each time. Overeem rocks him with a hard right that puts Werdum on his back, and this time Overeem follows into the guard. The big man may be taking a breather here. Werdum tries to get something going with the open guard, but Overeem backs away. A big knee from Overeem drops Werdum again, but it's hard to tell whether he's rocked or just pulling guard. Most likely it's the latter. Overeem again winds up in Werdum's guard in the final minute, but Werdum can't even begin to set up a submission. MMA Fighting scores it 10-9 for Overeem.

Round 3: Werdum opens up with punch combos to start the final frame. Overeem covers up and backs away, landing a hard right that sends sweat flying of Werdum's head. Werdum again tries pulling half-guard to no effect, and then pulls guard off an Overeem right hand a few moments later. He's just holding on to Overeem to keep him on the mat with him, but it doesn't let him work much offense. Overeem stands up and baits Werdum back to his feet. Werdum lands a couple nice blows, but he eats a hard right and again tries to pull half-guard. Werdum is not unsuccessful in the stand-up game, but he seems like he'd rather lose a decision off his back than take a chance on his feet with Overeem. A chant of 'Stand them up' erupts in the crowd. We enter the final minute of the fight and they're still mired in a quagmire on the ground. 30 seconds left, and they're back on their feet. Werdum lands several nice punches on a defensive Overeem, then pulls guard and looks for a leg lock, but runs out of time. MMA Fighting scores the round 10-10.