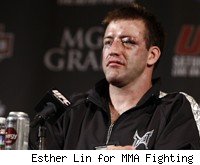 Stephan Bonnar has suffered a training camp injury and is out of his August fight against Karlos Vemola.

The UFC announced Bonnar's withdrawal from the fight late Friday, but did not disclose the nature of the injury.

Saturday, Bonnar told MMA Fighting the injury is a Grade II tear of his medial collateral ligament, or MCL. Bonnar said the injury will not require surgery, but will have him in a brace for six weeks. He said the injury is similar to ones that recently sidelined Rashad Evans and Kenny Florian.

Stepping in for the TUF 1 vet will be promotional newcomer Ronny Marki Sales da Silva, better known as Ronny Markes, to face Vemola at UFC on Versus 5 in Milwaukee.

Bonnar (13-7, 7-6 UFC) was looking to extend a two-fight winning streak that began with a TKO in his rematch with Krzysztof Soszynski at UFC 116 last July. In December, at the TUF 12 Finale, Bonnar dominated Igor Pokrajac to win a unanimous decision.

Those two wins had put a three-fight skid in Bonnar's rearview mirror. After returning from a long layoff from a severe knee injury, Bonnar lost to current light heavyweight champion Jon Jones at UFC 94 in Jones' second UFC fight, then lost to UFC Hall of Famer Mark Coleman at UFC 100. In his first fight against Soszynski, at UFC 110 in Sydney, Bonnar lost by TKO when doctors stopped the fight thanks to a cut from an accidental headbutt. That loss prompted his rematch with Soszysnki.

Vemola (8-1, 1-1 UFC), a Czech native fighting out of London, now gets Markes, from Brazil, who has nine of his 11 wins by stoppage. Markes will be fighting for the first time in the United States. His last win came in April, a unanimous decision over former WEC middleweight champion Paulo Filho in Brazil.

The Bonnar-Vemola fight had been booked for the main card and was to be televised live on Versus. It is not known if the Vemola-Markes fight will remain on the four-fight main card or if a bout previously scheduled for the prelims will be elevated to TV status. Top contenders to move up from the undercard would appear to be a middleweight fight between CB Dolloway and Jared Hamman and a bantamweight bout between former title challenger Joseph Benavidez and former champion Eddie Wineland.

UFC on Versus 5 takes place Aug. 14 at the Bradley Center in Milwaukee. It will be the UFC's debut in Wisconsin. The card features a main event welterweight fight between former title challenger Dan Hardy and Chris Lytle, plus a lightweight bout between Jim Miller and former WEC champion Ben Henderson.