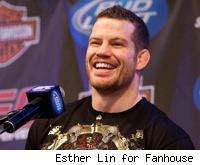 Last time on Fighter vs. Writer, I absolutely smoked Yves Edwards with my UFC 130 picks in one of the most lopsided wins in the history of the series. I'd like to brag about it more, but Edwards is such a nice guy and a class act, I can't bring myself to do it, which is a real shame.

For the next installment of the Strikeforce heavyweight Grand Prix, I called upon Nate Marquardt, another man who's already in fight mode for his bout with Rick Story at UFC Live next Saturday night. Nate the Great was kind enough to take some time out of his busy training schedule to prognosticate against me, and for that we thank him.

Marquardt: Overeem via decision. "He's bigger, stronger, faster – obviously a better striker. I think Werdum is tough, but he's going to have trouble with the stand-up and I don't think his wrestling is good enough to pose a threat to Overeem."
Fowlkes: Overeem via TKO. I agree with just about everything Nate said, except I'm not sure I see Werdum getting out of the first round. His best hope is that the hulking Overeem will tire out in the later rounds, but surviving the initial blitzkrieg from that big man will be tough.

Marquardt: Barnett via submission. "He's more experienced and better on the ground. I think Brett Rogers hits very hard, but I think he's a little green and he's missing a lot of technique."
Fowlkes: Barnett via submission. While I'm tempted to take a flyer on "The Grimm" based on the awesome power of his bungalows, I just don't see it happening. Barnett gets him down and finishes it early here.

Marquardt: Nobody. "I know K.J. Noons, but I don't know the other guy, so I can't say."
Fowlkes: Noons via decision. Since I've been burned before I'm always suspicious when fighters refuse to pick, since that means they can only score if the bout is a draw or no contest or doesn't happen at all, but I think I'm safe this time. Noons will chase Masvidal down and get the brawl he wants.

Marquardt: Cormier via decision. "I think obviously Jeff Monson's probably stronger and better on the ground, but Cormier will come in with a good game plan. But if they end up on the ground too much, Cormier could be in trouble with Monson."
Fowlkes: Cormier via decision. Simply put, Cormier has the ability to dictate where this fight takes place, and Monson doesn't. It's a good test for the former Olympian, but I think he'll do well, even if Monson will prove difficult to put away.

Marquardt: Overeem via TKO. "He's probably the better striker, and he has a lot more experience."
Fowlkes: Griggs by TKO. There's just no way I can't root for Griggs and his glorious muttonchops at this point. Strikeforce seems to want to forget about him, but he just won't allow it.

Tiebreaker question: time of shortest fight on the main card: