Strikeforce: Overeem vs. Werdum -- By the Odds 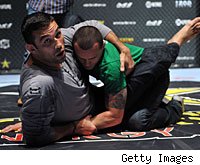 It took a while, but we're finally getting the next installment in the Strikeforce heavyweight Grand Prix this Saturday night, which means there's always a chance for some profitable upsets if you know how to pick them.

Last time, Antonio Silva was the underdog shocker. This time, who knows?

Oddsmakers have already laid out their vision for how the night will play out. Now it's our turn.

The last time he was a heavy underdog, Werdum made a fool out of oddsmakers (and people like me) with an upset victory over Fedor Emelianenko. Can he do it again? I hate to sound like a man who can't learn from his mistakes, but I doubt it. Werdum doesn't have the wrestling skills to take Overeem down, and my guess is that the K-1 champ isn't going to willingly go to the floor. If Werdum has to stand in front of the big Dutchman, he'll be eaten alive inside of one round. His best chance is to take it into the later rounds in the hope that it's been too long since Overeem has had to fight more than a minute or two in an MMA cage. If Werdum can manage that, then Overeem's bulk might start to work against him. But when you factor in Werdum's long layoff and his mediocre striking skills, it begins to seem like simply surviving the first round will be a challenge as daunting as Overeem's biceps.
My pick: Overeem. At these odds, you'd be crazy to lay a straight bet on it. You might be half crazy if you include him in a parlay. Still, Werdum doesn't have enough good options to justify the risk.

If it's a big underdog you're looking for, Rogers might actually be your best hope. A guy his size, with his power, can never be counted out of a fight, especially when he's fighting someone who hasn't exactly faced the best of the best lately. If we're just talking about straight-up skills and experience, of course, the edge goes to Barnett. He ought to be able to get Rogers down without much trouble, and once it hits the mat Rogers will be swimming in Barnett's pool. Still, if you're going to get crazy with your picks, this is the fight to do it with. Barnett hasn't been about much recently, and Rogers can always put some leather on your chin and ruin your night. I guess the question is, just how crazy do you feel?
My pick: Barnett. I'll admit it: I don't feel quite crazy enough. Barnett's range and experience will rule the day here.

Noons wants to bang, while Masvidal wants to counter. If I had to guess which one will get his way, I throw my lot in with Noons. At lightweight, he's a legitimate problem for most of the fighters on the Strikeforce roster. He's got good hand speed and dangerous power – at least when he's not giving up too many pounds as a welterweight, as he did against Nick Diaz. Masvidal is a tough, experienced fighter who can give as good as he gets, but I think he'll end up getting more than giving against the quicker, more aggressive Noons.
My pick: Noons. He may have to chase Masvidal down, but I think he'll eventually catch him and get that brawl he's looking for.

At the open workouts, Monson admitted that his wrestling isn't anywhere near as good as Cormier's, so he probably won't be able to take the former Olympian down. He also doesn't particularly like his chances to submit Cormier off his back, he said, which leaves me wondering, how exactly does he see himself winning? Cormier expects Monson to more or less concede the takedown and rely on sweeps to gain top position, but there's also the chance that these two grapplers will decide to stand there and slug it out. Cormier says he's fine with that, and I don't blame him. Cormier has almost every advantage in this fight, except when it comes to experience. Still, with all the international competitions Cormier has under his belt as a wrestler, Monson better bring more to this fight than just his cage savvy.
My pick: Cormier. Monson will be his stiffest test, but I predict he'll pass with flying colors. At these odds though, you won't profit from it.

You want a completely unpredictable fight that should be a lot of fun no matter who wins? Well, here you go. There's no telling what these two will do when they get in there, but after Griggs' last fight against Gian Villante, we should all be paying close attention to him now. The man has a brawler's sensibilities and a head made of concrete. That's good, since the lesser-known Overeem brother will probably test it early and often. The problem with Valentijn, however, is that you just never know what you're going to get out of him. Some nights he's a beast, others...not so much. With a guy like Griggs getting in your face right off the bat, you better show up prepared for a battle.
My pick: Griggs. Maybe it's the muttonchops, or maybe it's the way he threw out all regard for his own safety in his last fight. I don't know, but I do know I'm not prepared to pick against him here.