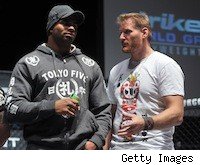 There are, it seems, two schools of thought on Strikeforce heavyweight champion Alistair Overeem. One of them says that he is the best heavyweight in the world, as evidenced by his striking excellence in K-1 competitions and grappling skills shown in submission fighting tournaments. In the cage, he's been a beast when he's fought, even though his competition has not been to the level to truly challenge him. The other school says he is way overrated, that he hasn't beaten anyone worth a lick in years, and that his reputation has as much to do with his physical presence as it does his actual skills.

That debate has been going on for a few years now. At least on Saturday, we begin to get a more tangible answer to the argument. Because whatever you think of Overeem right now, there is little denying that his opponent Fabricio Werdum is a very credible mixed martial artist.

Overeem (34-11, 1 no contest) goes into the fight battling not only Werdum but the heavy weight of expectation. His supporters are assuming he emerges with a dominant victory while many doubters won't change their minds unless they see the same. That will be a tall order. Werdum (14-4-1) has only been finished once, and that by current UFC No. 1 heavyweight contender Junior dos Santos, who laid him out in 81 seconds.

Werdum will be the first one to admit that he was out of shape and caught by surprise by dos Santos. He was run over by a fighter who was at the time little known but would go on to prove he belonged in the heavyweight top 10. Since then, Werdum has rededicated himself, improving his conditioning as well as his all-around game. He has three straight wins including victories over Grand Prix participants Fedor Emelianenko and Antonio Silva.

Still, most of the evidence seems to suggest Overeem will win. According to a FightMetric.com comparison, he is the more active and accurate striker, he gets hit less, and he has better takedowns and takedown defense. You don't need stats to see that he's a beast in the clinch, where he manhandles most opponents.

While Werdum lacks the one-punch power that has given Overeem problems in the past, he does have the grappler's equivalent with his ground skills. In fact, he's the only fighter to ever force Overeem to tap to a submission move when he got him with a kimura back in May 2006. At the time, Overeem was more wiry and lithe. Now he's more muscular and hulkish. That extra power along with refined technique will no doubt be a factor.

In the end, Overeem's major edge on the feet is too much to bet against. His striking skills and power are well ahead of Werdum's. The Brazilian will no doubt at some point try to spring a similar trap to the one he caught Emelianenko with last June. He will try to bull him against the fence or pull guard. Anything to get it to the ground. But Overeem isn't the same scrawny kid he used to be, and he's also not as wild. He's more likely to stand up and out of Werdum's guard than to play with him for extended periods of time on the ground. The less time on the mat, the less chance of a Werdum victory. The pick is Overeem via second-round TKO.

Josh Barnett vs. Brett Rogers
Of all the first-round Heavyweight Grand Prix fights, none has seen a bigger favorite than Barnett over Rogers. The "Babyfaced Assassin" will be fighting back in the U.S. for the first time since January 2009.

If there's one thing that makes you raise an eyebrow about Barnett's chances, it's his relative inactivity. Barnett (29-5) has fought just three times in the last 29 months, and not since last July. Given his veteran status though, you have to believe he is better equipped to handle a long layoff than a younger fighter.

Barnett's biggest challenge in this fight might be staying out of the way of Rogers' haymakers (he has nine wins by knockout). Rogers 81.5-inch reach combined with his power makes him a serious threat, but Barnett has long been known for a good chin. He's only been KO'd once in his career, and that was over 10 years ago.

Being a smart fighter, Barnett is unlikely to engage Rogers (11-2) too long on his feet. Though he's no takedown artist, expect him to initiate clinches and look to take Rogers down, where he should have a huge advantage on the ground. We've never seen Rogers involved in any significant ground action where he had to work from under an opponent. In Barnett, he'd have to do it against one of the heavyweight division's best submission artists (17 of his 29 wins are via tapout).

Once 10-0, Rogers has struggled over his past three bouts, getting finished by both Emelianenko and Overeem before winning a decision over journeyman Ruben Villareal last October. The onetime tire shop worker has every chance to reignite his career with an upset over a highly favored foe. To do that, he's going to have to keep the fight upright, something he's failed to do against lesser opponents, who have taken him down on four of their last seven attempts against him, per Compustrike numbers.

Barnett is too skilled and too savvy to let Rogers dictate the location of this fight. He'll get it to the ground, and he'll get the tapout. Barnett via second-round submission.