Jorge Masvidal Says K.J. Noons Can Look Past Him All the Way to the Hospital 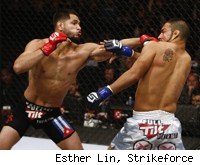 DALLAS – Just like no fighter wants to admit to overlooking an upcoming opponent, no opponent wants to be overlooked. So when Jorge Masvidal heard that K.J. Noons already has his eye on a potential lightweight title shot, the anger couldn't help but simmer over just a bit.

"It's good for me, because the only thing he's going to be looking at is the doctor after this fight," Masvidal said on Thursday. "He's going to have a tube in his mouth, getting rushed to the hospital. I really don't care."

Of course, when it comes to the whole 'of course I'm looking past him' remark, Noons insisted that he didn't mean he wasn't taking Masvidal seriously. Quite the contrary, he said.

"I'm not looking past him; I'm just looking at a goal. The ultimate goal is to be the best in the world, obviously, so if it's that close it's making me more motivated to train hard for this guy so I can get that title shot. But by no means am I looking past him. I think this is one of my toughest opponents ahead of me."

In Noons, Masvidal sees a guy who likes to brawl more than he likes to box. And that, Masvidal said, just isn't his style.

He expects Noons to come in looking for a messy brawl, and even Noons admitted that Masvidal probably wasn't far off in that assessment.

"I think he's pretty right on. I consider myself a boxer-brawler. I can go out there and box if I want to, but...that's not what I like to watch as a fan, and that's how I like to fight is to get in there and mix it up and take risk," said Noons. "If you take the risk, there's higher reward. But with those risks you may have the risk of getting hit, getting knocked out, but that's what makes for exciting fights."

It's also what makes for the kind of fights that Noons hopes will soon earn him a title shot. That is, if he gets past Masvidal, who seems far less concerned about a belt than he is about the task at hand on Saturday night.

"I want to punch his face in, and then we'll get to whatever comes next," said Masvidal.

He may not want to brawl, but those hardly sound like the words of a man in search of a safe decision.