Will Grand Prix Winner Be Best Heavyweight in MMA? Depends Who You Ask 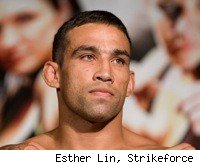 DALLAS – At the UFC 131 pre-fight press conference in Vancouver last week, Yahoo! Sports reporter Kevin Iole began to ask Dana White a question about what he planned to do with the winner of the Strikeforce heavyweight Grand Prix, since that man would arguably be the top heavyweight in MMA.

"Say that again?" White interrupted, before adding his own interpretation. "The winner of that tournament will be the best heavyweight in Strikeforce," he stated flatly.

The accuracy of that statement is a matter of opinion and the subject of some debate. But even among the four big men set to square off in the latest installment of the eight-man tournament this Saturday night, a consensus is hard to come by.

Take Fabricio Werdum, for example. He entered the tournament with wins over three fellow participants, including Fedor Emelianenko and Alistair Overeem. But that doesn't mean that he thinks all it will take is a Grand Prix championship to cement his status as the world's best heavyweight.

"[The winner] will be the best heavyweight in MMA," he said. "You've got the top heavyweight fighters, and they're here in one tournament. If you keep winning you go on, and if you end up on top, you're on top."

Even if the winner ends up facing the UFC champion immediately after the tournament, Overeem seems certain that the Strikeforce representative will come out on top, regardless of who holds the UFC strap by then.

"I think the winner of this will probably beat the UFC champion...whoever it is," Overeem said. "This group of fighters, this top eight, is better than the top eight [heavyweights] in the UFC."

Meanwhile, Brett Rogers, who is as high as a 3-1 underdog in his quarterfinal fight with Josh Barnett on this weekend's card, is doing his best not to think about the question at all.

"Ultimately, I don't even care," he insisted. "People always ask me, 'If you win this tournament, does that put you as the best?' I'm not looking for that situation, because who is ultimately saying that I'm the best?"

While some would say that simply beating the man necessarily makes you the man (call it the Ric Flair doctrine, if you will), Rogers has heard that logic once before, and it doesn't make any more sense to him this time around.

As for Barnett, the most senior fighter left in the tournament, he approaches the question with all the wry cynicism you'd expect from a guy with more than 14 years in the sport.

"I think the winner of this will get snubbed by a bunch of a-holes," he said. "...I don't know, rankings are rankings and that's fine. It doesn't matter what the media or anyone else thinks of my ranking. I'm still going to get paid more every time I beat people up."

But then, just because Barnett claims not to care about rankings, that doesn't mean he doesn't have an opinion on them. He can understand why the UFC president would downplay the significance of the tournament, he said. But as for the true meaning of it all?

"I think it's the best heavyweight in MMA," said Barnett. "I think the way some of the rankings have been set up are absurd. I'm not going to get into that situation, as much as you would love for me to cut down fighter A or fighter B, but I think there have been some really arbitrary decisions made on certain individuals in the MMA world where they've been ranked way higher than they ever deserved to be. You get to where the ranking is based on fighter X's win over fighter Y, when fighter Y was overrated to begin with. If you get a couple dogs up in the top ten, and then you get someone who really is decent and he gets some wins over questionable guys, then he's climbing the ranks, or someone else is using him to climb the ranks. It's a vicious cycle."

Of course, maybe we're getting ahead of ourselves to begin with. Now that Zuffa owns Strikeforce, there's no guarantee it will even play out the tournament to completion, or that the winner will ever get a chance to prove himself against the top dog in the UFC if it does. Both seem likely, but, as Barnett put it, "I was 100 percent certain that Strikeforce wasn't going to get sold, too. So there you go."

Still, if there's any chance of the that, don't tell it to Werdum. He not only has his heart set on being the eventual tournament winner, but also on getting his day in the cage with the UFC champ as well.