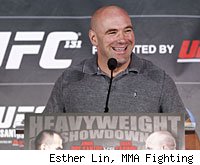 The UFC is just two months away from hosting the biggest MMA event Brazil has ever seen, and as it continues to promote the UFC 134 fight card, the organization will host a press conference in Rio de Janeiro on Thursday. We'll have the live video right here at MMAFighting.com.

The press conference begins at 2 PM ET on Thursday and the video is below.