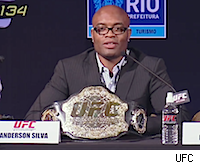 The long absence is nearing its final days. On August 27, the promotion returns with UFC 134, an event to be held in the nation's most well known locale, Rio. And it returns with the man who is arguably MMA's best fighter, Silva, in the headline spot.

When it comes to Silva's current place in the game, there's no question in the mind of UFC president Dana White. To White, he's No. 1 with a bullet. But at a Thursday press conference, while running down Silva's incredible resume, White thrust the 36-year-old into an even more historic spot.

"He hasn't lost a fight in five years," White said. "He's never lost in the UFC. The last time he lost was to Yushin Okami in October 2006. He's got the most title defenses ever, with eight. He's got the longest [UFC] win streak ever, at 13-0. And in my opinion, he's the greatest mixed martial artist ever. Ever, period."

There is certainly a strong case to be made on Silva's behalf, but the comment plays particularly well with Silva as the drawing card for this important show. International markets have proven to be big business for Zuffa, and few may be more important long-term than Brazil, which is one of the world's fastest-growing economies and which produces much of the world's best fighters.

That combination made Brazil a must for the UFC calendar, even though it took much longer than either side would have liked.

"This is where it all started," White said. "If you really think about it, this is where mixed martial arts started. It's a long time overdue. We should've been here sooner. It means a lot for us to be here. Obviously, these guys have fought all over the world -- Japan, the United States, the UK, Abu Dhabi. You name it, they've fought everywhere. I know how much it means to the guys to finally be able to fight in their home country and in front of their people."

The card will be heavy on Brazilian fighters. Of the 10 fights that have been verbally agreed to, nine of them feature home grown talent. None, of course, will mean more to the Rio crowd -- 16,572 seats will be configured at the HSBC Arena -- than Silva, the lithe but wiry middleweight champ who will be searching for his 15th straight victory overall.

Silva went with the nationalistic lean, voicing his excitement about fighting at home after a long journey abroad.

"In my opinion, me and my colleagues, this is the Brazilian team," Silva said. "Like the Brazilian soccer team against the world, basically. I'm very happy to be here in Brazil. It's motivation. For sure, I'm going to give it all to represent my country, my Brazilian fans and my family as well."

Silva's fight will have some personal significance, too. In the record books, Okami is the last man who holds a win over Silva, a victory that came by disqualification on an illegal upkick. And though Silva said during the proceedings that it's not a revenge fight, he also showed that the result of that fight irks him a little bit. When asked about the importance of avenging the loss, Silva said it was not anything that has bothered him before adding, "Just to correct you, I did not lose."

In an argument of semantics, he may have a case, but factually, he lost. That makes the fight against Okami an important one for his legacy. Few other challenges await in the 185-pound class, but Silva said that his future remains as a middleweight.

"I intend to stay in this division, at this weight," he said, explaining that his teammates inhabit higher weight classes, making his move unlikely. Among those he mentioned was heavyweight Antonio Rodrigo Nogueria, who sat on stage a few feet away, with Mauricio "Shogun" Rua between them. On the other side of White's podium stood their respective opponents, Forrest Griffin, Brendan Schaub and, of course, Okami.

Guests on enemy territory, they all voiced their comfort in fighting on the road. Griffin noted that once you step into the cage, it's a hostile environment. Schaub reminded people he was booed when he fought Mirko Cro Cop. And Okami said that he'd been fighting out of his country for most of his career. But what they think will be much different than what they experience on August 27. Brazil is known for some of the most passionate sports fans in the world, and Silva, "the greatest ever," will no doubt want to put on a show for them. After a long wait for his return and a longer wait for the UFC's, the fans will want to put on a show, too.