MMA's Best-Known Anarchist Sticking to His Guns for Strikeforce Debut 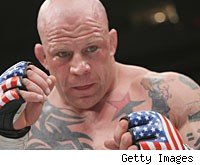 Jeff Monson has cost himself plenty of money over the years. Nobody has to tell him that. It's not the tattoos. In another line of work being inked from head to toe with everything from anarchy symbols to a Soviet hammer and sickle might be detrimental to your career health.

But Monson is lucky. He's in the line of work where tattoos are almost part of the uniform. When he fights Daniel Cormier in Strikeforce this Saturday night, it will probably barely merit a mention from the commentary team.

"As far as sponsorships and making money? One hundred percent, it's cost me," said Monson. "I've had sponsors tell me they don't want any part of it because of the things I say. I had stuff set up with a nutrition company and clothing company and stuff that I've lost because of it, and it's cost me a lot of money. But at the end of the day, you've got to live with yourself. Some things are just right and wrong."

In case the tattoos didn't give it away, Monson freely identifies himself as an anarchist. Not that he thinks most people truly understand what that means, at least to him.


"It has such a bad connotation, like being an insurgent or a terrorist or a communist or something," he said. "To me, it gets portrayed as something that it's not. Anarchy is a society where everyone is free. Everyone has equal rights. Everyone has a voice."

It's not that he wants to live in a state of constant chaos and violence, he insisted, but rather in one where people decide amongst themselves how to live, without a government cracking the whip to keep them in line. He wants a peaceful orderly society, but he doesn't want authority figures making sure it stays that way.

In other words, he wants a society that doesn't exist and that some would argue can never exist, but he wants it anyway. When simply wanting it or marching in support of it -- as he did in Paris a few weeks ago -- doesn't feel like enough, he believes in taking action. And here's where the real trouble starts.

Take the incident at the Washington state Capitol building. It started when military convoys wanted to bring equipment through OIympia on its way to a port to get shipped overseas to Iraq, Monson said.

In protest, Monson spray-painted his message on the Capitol building late one afternoon. The anarchy symbol. The words "No war." General pleas for peace.

It's not that he thought it would immediately end the war in Iraq and bring about his ideal anarchist society, he said, but he wanted lawmakers to see it on their way to work the next morning. When the photos of Monson doing the spray-painting were published in ESPN the Magazine, law enforcement officials saw it too, and he had a problem on his hands.

Monson entered an Alford plea to charges of malicious mischief and was given work release and ordered to pay over $20,000 in restitution. He also got himself known in MMA circles for the wrong reasons. Major organizations weren't exactly clamoring to take on a middle-aged heavyweight with legal problems and far-left political beliefs. Whether it was his personal baggage or simply the natural progression of the fight business, that's debatable. But in a few short years he went from fighting for the UFC heavyweight title to competing on one small promotion after another, most of his fights visible only on the internet if at all.

"I've had a lot of people come up to me and say, 'I watched your fight against [Tim] Sylvia in the UFC. What have you been up to since then?' And I'm like, well, I've had about 25 fights since then. If you're not on TV, nobody knows.

"It's definitely frustrating, because in some of my recent fights I've beaten guys who are tough, who have wins over guys who are in the UFC, so it's not like they're easy fights. I'm not fighting just to be known or anything, but I am fighting to get a title. And if nobody knows what you're doing, it's tough to get a shot at a title."

Now Monson is finally back in the big leagues with Strikeforce, and has the opportunity to make a big impression against the undefeated Cormier, a former U.S. Olympic wrestling team captain. But at 40 years old, time is running out on Monson, and he knows it. He might only have a couple good years left in him, so he has to make the most of them, he said.

"I want to win this fight obviously, but then my plan is to drop to 205 [pounds] and make a run at the title. My weight is pretty low already – right now it's under 230 [pounds] – so cutting to 205 would be no big deal. I want to win this fight, see what happens from there, but drop down and make my run at a title. ...That's the only reason I fight. That's it. The only reason I fight is to win a Strikeforce or UFC title. If there was no possibility that that would happen, I'd retire today."

Then again, a part of him thought he'd already be retired. Two years ago when people asked him how much longer he'd continue fighting, he told them two more years. Then he fought five times in 2009 and nine times in 2010. The fight with Cormier will be his fourth this year, so it's not as if he's slowing down.

At the same time, he knows he can't keep up that pace forever. He's already fought well beyond the point where most fighters stop being competitive, and he doesn't want to be another one of the guys who stays too long in a sport that offers few rewards for second place.

"As you get older, some things happen," Monson said. "You're not as fast. Maybe it takes you longer to recover. But good things come of it too. This is a brand new sport, and we forget that. What was baseball like twenty years after it was mainstream? It's the same with us. In twenty years, these fights are going to be dinosaur fights. So I'm still learning new stuff and taking care of my body better. But I'm not going to do it if I can't compete anymore. I'm not going to do it for a paycheck or just to walk around and say I'm an MMA fighter. If I can't compete, that'll be my last fight."

The irony is, in order to get that shot at a major title, he has to go through the proper channels. He has to take what is, in the MMA world, about as corporate a gig as one can get. Fighting under the Zuffa banner means working for the man, in a sense. Not that he hasn't already thought this one through, of course.

"I'm like everybody else. I live in a capitalist system, so that's what I have to do. ... I may not like it or agree it, but that's our society. I'm trying to change it, but I'm not a hypocrite either. I know that I have to earn money to pay bills. I just happen to have a job that I enjoy, and I do feel blessed. If I could make any job for myself, this would be one of them.

"At the same time, these people paying me to fight, they're making a hell of a lot more off the fighters than they're paying them. They're doing it to make a profit. In essence, they're stealing from me. It's like someone working in a shoe factory making shoes, that person doesn't get paid what those shoes are worth. They get paid a fraction of it. They get paid the minimum they can get paid and stay living and employed and keep them from quitting. They're wage slaves, just like I'm a wage slave."

Again, probably not exactly what the bosses want to hear from a man who hopes to one day hold one of their major titles, but that's Monson. That's how he's always been. He's made his way in the sport for more than a decade without worrying too much about what other people want to hear. Why change now?