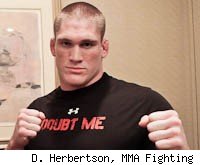 Todd Duffee, owner of the fastest knockout in UFC history, will get another chance to prove himself in Japan as it was revealed on Wednesday that the heavyweight power-puncher has agreed to square off with the undefeated "Bully Beatdown" veteran Nick "Afrozilla" Gaston at DREAM.17 on July 16 at Ariake Coliseum.

Duffee's promotional debut at Dynamite on New Year's Eve 2010 was catastrophic. In his first fight since being cut from the UFC due to attitude problems, Duffee took a fight on extremely short notice and against the advice of his manager with one of the most dangerous men in the heavyweight division: 2010 K-1 World GP champion and Strikeforce ace Alistair Overeem.

As many predicted, Duffee proved to be no match for the much more experienced Overeem and the American fell in only 19 seconds.

Also announced for DREAM's first numbered event of the year, Atsushi Yamamoto, who TKO'ed newcomer Yusaku Nakamura in his May 29 Bantamweight GP quarterfinal bout before falling to Hideo Tokoro in the semifinals, has been forced out of his third-place GP bout with Kenji Osawa due to a detached retina. ZST bantamweight champion Keisuke Fujiwara, who dropped a decision to GP finalist Masakazu Imanari in the quarterfinals, will instead face Osawa for third place honors.