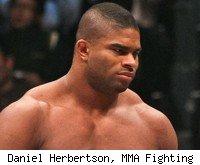 After a far-too-lengthy delay, Strikeforce's heavyweight tournament is finally about to return, with the final two first-round fights taking place on Saturday in Dallas, as Alistair Overeem rematches Fabricio Werdum and Josh Barnett takes on Brett Rogers.

What: Strikeforce: Overeem vs. Werdum

When: Saturday, the undercard begins on HDNet at 8 PM ET and the main card starts on Showtime at 10.

But Overeem is a much, much better fighter now than he was then. For one thing, he's gone through an extraordinary physical transformation and is packing on about 30 pounds more muscle. For another, he has refined his kickboxing to the point where he won last year's K-1 World Grand Prix Final. Werdum isn't facing the same Overeem he was in Pride.

Werdum is also coming off the biggest win of his career, against Fedor Emelianenko a year ago, but I can't help but question whether the long layoff since the Fedor fight is going to be a problem for Werdum, who hasn't always stayed in top shape between fights. I like Overeem to smash Werdum and make a strong case that he's the most dangerous heavyweight in all of MMA.
Pick: Overeem

Josh Barnett vs. Brett Rogers
Barnett is a heavy favorite and has accomplished far more in his MMA career than Rogers, but I'm just not convinced that he still has it anymore: After getting busted for steroids before a planned fight with Fedor two years ago, Barnett has only fought twice, and although he won both, neither was against good opposition. I see the heavy-handed Rogers pulling off a surprise TKO win.
Pick: Rogers

K.J. Noons vs. Jorge Masvidal
Noons is fighting for the first time in 2011 after a very active 2010 saw him win three fights and then lose a hard-fought decision to Nick Diaz. Masvidal took it to Billy Evangelista in winning a one-sided unanimous decision in March, but I like Noons to stand and bang with Masvidal and win a decision.
Pick: Noons

Daniel Cormier vs. Jeff Monson
One of the best prospects in the heavyweight division in all of MMA, Cormier is a great wrestler who should have no trouble taking Monson down and controlling. At his best, Monson is a good enough submission grappler to threaten anyone on the ground, but at age 40 Monson is no longer at his best.
Pick: Cormier

Valentijn Overeem vs. Chad Griggs
A year ago, Strikeforce signed Griggs as nothing more than a warm body to throw in the cage with Bobby Lashley. But Griggs surprised everyone with an upset of Lashley, then won another fight with Gian Villante in February. Now he gets Valentijn, Alistair's older and less talented brother, and I think he'll make it three in a row in Strikeforce.
Pick: Griggs