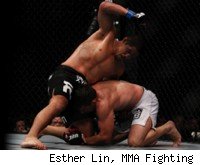 Could Mark Munoz be a future contender to Anderson Silva's middleweight title? That's a question few people would have asked before UFC 131. But after Munoz beat Demian Maia, it's a serious question.

After defeating Maia, Munoz is 6-1 since moving down to middleweight, with the only loss coming by split decision to Yushin Okami, the UFC's current No. 1 middleweight contender. Munoz is probably only one more win away from being the UFC's best option to fight Silva, assuming Silva beats Okami.

Munoz would be a huge underdog to Silva, of course, but every middleweight is a huge underdog to Silva. And Munoz, a former NCAA champion wrestler, at least has the tools to threaten Silva where he's weakest. Munoz and Silva are friends and training partners, and they might not wish to fight each other. But if both of them win their next fights, we could be heading toward a situation where fighting each other is what the UFC asks them to do.

See where I have Munoz ranked among the middleweights in MMA below.

1. Anderson Silva (1): The last time Silva lost, it was by disqualification when he illegally kicked Okami in the head on the ground. Since then Silva is 14-0, with half of those wins coming by first round knockout or technical knockout.

2. Chael Sonnen (2): Sonnen still deserves to be ranked No. 2 because of his impressive win over Okami and his tough fight with Silva, but soon he's going to start dropping because of inactivity. There doesn't seem to be any end in sight for Sonnen's problems getting an athletic commission to license him.

3. Vitor Belfort (3): Belfort's 19-9 record really doesn't do his career justice, as the nine losses are to a who's who of great fighters: He's lost to Randy Couture twice, Alistair Overeem twice and Kazushi Sakuraba, Chuck Liddell, Tito Ortiz, Dan Henderson and Anderson Silva. Up next for Belfort is Yoshihiro Akiyama.

4. Yushin Okami (4): Although Okami does technically have a victory over Silva on his record, Silva was getting the better of Okami before he was disqualified for the illegal kick. If Okami can beat Silva in their August rematch in Rio, it would probably be the biggest upset of the year in MMA.

5. Mark Munoz (NR): Getting knocked cold by Matt Hamill might have been the best thing to ever happen to Munoz. That fight made him decide to move down from 205 pounds to 185, and he's much more impressive at the lighter weight.

6. Demian Maia (5): The Maia-Munoz fight could have gone either way, and even in defeat Maia showed that his striking is continuing to improve. However, the fight also showed that Maia can't just submit anyone he gets to the ground. In his first five UFC fights Maia submitted all five opponents, but in his last six fights he hasn't submitted anyone.

7. Brian Stann (6): A matchup between Stann and Munoz would make a lot of sense as a next step for the UFC, and the winner would have a strong case for being the next No. 1 contender in the middleweight division.

8. Ronaldo Souza (7): Jacare, the Strikeforce middleweight champion, will defend his title against Luke Rockhold in September. Rockhold is 7-1, and all seven wins are by first-round stoppage, but he's not on the same level as Jacare, who should be able to make Rockhold tap.

9. Wanderlei Silva (8): The soon-to-be 35-year-old Silva isn't the fighter he once was, but his UFC 132 fight with Chris Leben promises to be an all-out war. And if he wins in spectacular fashion, it's possible that the Axe Murderer could get the next shot at the middleweight belt.