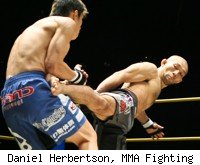 The Dream.17 fight card will be highlighted by a pair of championship bouts and the finals of the 2011 Dream Bantamweight Grand Prix on July 16 at the Ariake Coliseum in Tokyo.