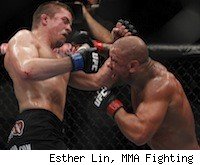 Rick Story hadn't even yet gotten over the soreness of his May 28 win over Thiago Alves when the phone rang. On the other end was an offer to fight Nate Marquardt, a former middleweight No. 1 contender who was dropping down to welterweight and in need of an opponent after originally scheduled foe Anthony Johnson was forced out.

The proposed fight at UFC on Versus 4 would come with less than a month to recover, study and prepare. For some, the answer would have been a simple no. For others, they would have needed some time to think it over. But for story, the question to fight on short notice might as well have been a rhetorical one.

"No hesitation at all," he said on a Tuesday teleconference. "The challenge is sticking with an intense training regimen for a long time because the training camp for Alves was a while. Trying to stay away from injury and everything, that's another challenge when you're training so hard. But at the same time, it's awesome training like that, jumping back into a training camp when your in-shape. It's really to throw one or things into a game plan and you're ready for another fight."

It's not quite so simple as Story (13-3) makes it sound however. The 26-year-old is riding the wave of a six-fight win streak, and while that success has raised his profile and made him a possibility for important matches, it also puts him at risk.

Even though he is doing the UFC a favor by taking the bout on short notice, he's also gambling all the momentum that he's built over the course of streak he's built in the last 21 months.

Championsihp opportunity? It could be gone for good if he loses. But Story's betting that a win over a major name like Nate Marquardt could be the type of defining victory that puts him firmly in the title mix once and for all, perhaps even get him a title shot.

"I think it all depends on how the win would go," he said. "Maybe one more fight if it's a decision, but if it's a finish, a finish over an opponent like Nate would definitely put me in a position where I'd probably deserve the shot even more."

Story said his willingness to take the fight stemmed from his own personal history. He began his pro career in Nov. 2007 and fought five times within the first three months. Then after a three-month break, he fought four times in four months. That level of activity seemed to agree with him.

"That was the best I ever performed is when I fought every month," he said. "Just building off last my performance and keep the momentum going. With this opportunity to be able to fight so soon, we jumped all over it."

The prospect of fighting his toughest fight on short notice doesn't phase Story. Neither does being in the main event for the first time or being the first man in the UFC to fight Marquardt as a welterweight.

"I've fought against strong opponents and really strong, big guys," he said. "I don't know exactly what to expect. I know Nate was a strong middleweight fighter, and if I go there expecting war, I'll be fine."