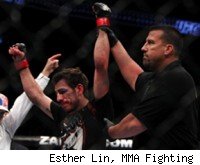 Kenny Florian is the most likely next contender for the UFC featherweight championship. But has he really earned a title shot against Jose Aldo?

If the way you "earn" a title shot is to work your way up the ladder and become the No. 2 fighter in your weight class, then the answer is no. Florian has fought just once at 145 pounds -- his unanimous decision victory over Diego Nunes at UFC 131 -- and that's not enough to get him in the No. 2 spot ahead of Chad Mendes, who's been fighting at featherweight his entire career and built up a 10-0 record.

But the real way a fighter earns a title shot is to become the guy the fans want to see fighting for a title: The UFC is in the business of selling pay-per-views, and Florian vs. Aldo would sell far more pay-per-views than Mendes vs. Aldo. Mendes has fought in the Octagon once and isn't all that well known, while Florian has fought in Octagon 16 times and is a fan favorite. That's why he'll get the next crack at Aldo.

However, that's not to say Florian isn't also among the elite featherweights in MMA. Find out where I have him ranked below.

(Number in parentheses is the fighter's previous ranking.)

1. Jose Aldo (1): So far, in the UFC and WEC there hasn't been a featherweight who has what it takes to challenge Aldo: He's 9-0 fighting under the Zuffa banner and hasn't been in any real trouble. We'll see if Florian can be the man to test Aldo, but I have my doubts.

2. Chad Mendes (2): Mendes thought he had earned the next shot at Aldo, but instead he'll take on Rani Yahya in August, and hope that a good showing there earns him a title fight after that. Mendes is only 10 fights into his MMA career and still a little green, so having to wait a little longer may be good for him.

3. Hatsu Hioki (3): Here's hoping Hioki is able to sign with the UFC soon. The best featherweights in the world are waiting for Hioki, who has been great in Japan and whose long limbs and well-rounded striking and grappling style could make him a threat to most of the top competition in the UFC.

4. Kenny Florian (NR): Is one win at 145 pounds enough to make Florian worthy of a Top 5 ranking? I think it is, considering that the one win was a very impressive one against a good opponent, and considering that Florian was generally recognized as a Top 5 fighter in a more talented weight class when he was fighting at 155.

5. Manny Gamburyan (4): Gamburyan is trying to bounce back from his loss to Aldo in September, and he's got a very interesting fight coming up against Tyson Griffin, who like Gamburyan and Florian is a former lightweight hoping for more success in the shallower waters of the featherweight division.

6. Marlon Sandro (6): Bellator's featherweight division has picked up some top-notch talent, and in my opinion the best of the bunch is Sandro, who will take on fellow Brazilian Genair da Silva in the first round of Bellator's summer featherweight tournament.

7. Mark Hominick (7): His gutsy performance in defeat against Jose Aldo endeared Hominick to MMA fans. There's talk that Hominick could face Chan Sung Jung next, in a fight that couldn't possibly be anything less than thrilling.

8. Erik Koch (8): Koch is 12-1 in his career, with the only loss coming against Mendes. He's been matched up with Season 12 Ultimate Fighter winner Jonathan Brookins in September.

9. Dustin Poirier (10): Poirier has looked like a much better fighter since moving down to featherweight, dominating both Josh Grispi and Jason Young at 145 pounds. Poirier is only 22 years old and is a likely future title contender.

10. Diego Nunes (9): Although he came up short against Florian, Nunes is only 28 years old and not done improving. He has a lot of big featherweight fights ahead of him.