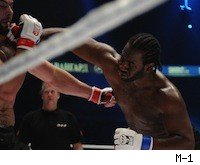 M-1's second solo promotional effort on Showtime will air from The Hangar in Costa Mesa, California on July 8, the promotion announced on Tuesday.

Headlining the event will be a heavyweight bout pitting Kenny Garner against Pat Bennett.

Garner (6-3) is a winner of four of his last five bouts, with his only loss coming against M-1 Global heavyweight champion Guram Gugenishvili. Ironically, Garner is replacing Gugenishvili, who was forced out of the event with injuries to his left arm and wrist.

Bennett, meanwhile, is 4-2 and is coming off a decision win over Alexander Volkov.

The matchup between Garner and Bennett will come as a rematch. The two met in September 2010, with Garner winning in a first-round TKO in the finals of the M-1 Selection Americas tournament.

The event marks the second installment of M-1 on Showtime. Its debut offering, M-1 Challenge 24, drew an average of 189,000 viewers to the premium cable channel.

Mauro Ranallo and Pat Miletich will call the action for Showtime, beginning at 11 pm ET.