Kid Yamamoto, Damacio Page to Meet at UFC 135 in Denver 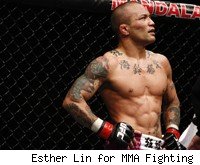 Both needing to rebound from losses earlier this spring, Norifumi "Kid" Yamamoto and Damacio Page have verbally agreed to meet at UFC 135 in Denver this fall.

The UFC announced the bantamweight fight Monday night, with president Dana White calling Yamamoto and Page "two of the most aggressive sluggers" in the 135-pound division.

UFC 135 will take place Sept. 24 at the Pepsi Center in the Colorado capital city of Denver, home to the NHL's Colorado Avalanche and NBA's Denver Nuggets. UFC vice president of regulatory affairs first confirmed the location to MMA Fighting earlier this year.

Yamamoto (18-4, 1 NC, 0-1 UFC) made his highly anticipated UFC debut in February at UFC 126 against Demetrious Johnson. "Mighty Mouse" took "Kid" down 10 times in the fight and cruised to a 30-27 unanimous decision sweep of the scorecards. It was Yamamoto's third loss in four fights after starting his career 17-1, mostly in the Japanese Shooto and K-1 promotions.

Yamamoto, one of the most popular fighters in Japanese MMA history, has finished 15 of his 18 victories – 13 by knockout or TKO. He is also the owner of a record 4-second knockout of Kazuyuki Miyata courtesy of a flying knee at K-1: Hero's 5 in 2006.

Yamamoto was expected to face Chris Cariaso at UFC 130 last month, but he had to pull out of the fight with an injury.

Page (15-6, 0-1 UFC) has lost two straight fights, both by guillotine. In March, at UFC on Versus 3, he lost a rematch to Brian Bowles, who had beaten him at WEC 35 in August 2008. And in one of MMA's truest oddities, he lost to Bowles by the same method and in the exact same time as their first meeting: a guillotine tapout 3:30 into the first round. Prior to that, in his WEC swan song, Page, like Yamamoto, ran into trouble with Johnson, getting caught with a guillotine in the third round.

Page, like Yamamoto, is a fight finisher. Of his 15 wins, 14 have come by stoppage with eight knockouts and six submissions. By the time UFC 135 rolls around, Page will be looking for his first win in nearly two years, since a rear naked choke win over Will Campuzano at WEC 43 in October 2009.