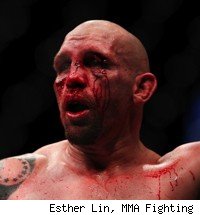 Due to technical difficulties, Falling Action comes to you a day later than usual, and for that we apologize.

But as long as you haven't pushed all recollection of UFC 131 out of your mind in order to make room for the beautiful new memories you made on Sunday and Monday – in other words, as long as you have greater brain capacity than a golden retriever – we figure most of you ought to still be able to enjoy a thorough discussion of this past weekend's winners, losers, and everything in between.

If not, here's a chew toy. Knock yourself out.

Biggest Winner: Junior dos Santos
We knew the big Brazilian could box even before he turned Shane Carwin's face into ground beef. What we (okay, I) wondered was, could he stay on his feet and out of the clinch enough to put those skills to work? Against former Division II national champion wrestler Carwin, the answer for dos Santos, much like it is for every question asked of the Kool-Aid Man, was: ohhhhh yeah. He picked Carwin apart with his jab and kept the fight at a safe distance (well, safe for him, extremely dangerous for Carwin). He even showed off some spiffy defensive wrestling on the few occasions where Carwin got in close enough to test him. UFC heavyweight champion Cain Velasquez is quicker and more explosive than Carwin, so that will be a different kind of challenge, but dos Santos showed us on Saturday that he's more than deserving of the shot. Now if only we didn't have to go six months between major heavyweight fights, this division might actually get somewhere.


Biggest Loser: Shane Carwin
It was as gutsy a performance as you'll ever see, and with it he proved that he has the cardio and the heart to go the distance. At the same time, the closest he came to being competitive in this fight was when he landed one solitary left hook that made JDS go wobbly, and even then he couldn't get close enough to follow up. Carwin did the one thing he couldn't afford to do in this fight, which was hang out at the end of dos Santos' jab. He got into a boxing match with a superior boxer, and the results were about what you'd expect from such a strategy. Again, any man who can take that kind of a beating and still keep coming is so tough that he borders on being mentally ill, so give Carwin his props for that. At the same time, he's 36 years old and in the past eleven months he's lost one title shot and one no. 1 contender fight. It's starting to look like that interim title might be the only UFC belt he's ever going to own.

Most Impressive in Defeat: Demian Maia
The Maia of three years ago would have gone into the fight with Mark Munoz looking to pull half-guard right away just to avoid the terrifying world of stand-up fighting as much as possible. That Maia was very good at what he did, but he was also limited. In a losing effort against Munoz he showed that he's a much more complete fighter now, and he's only getting better. You could make the argument that he's a little too content to fight on the feet these days, which leaves his best weapon – his submissions game – tragically under-used. I wouldn't argue with that, and maybe neither would Maia. My hope is that what we're seeing now is just the swing of the pendulum as his overall game evolves. Maybe this loss will convince him to find a better balance in the future.

Least Impressive in Victory: Krzysztof Soszynski
In fairness, Mike Massenzio didn't give him much to work with, but what did we expect? Massenzio took a short-notice fight in the weight class above his own and Soszynski still couldn't do much more to him than stuff his takedowns and try to set up an offense that came only in short, tentative bursts. True, Massenzio didn't make for much of a dance partner, but if Soszynski can't do more with a size advantage like that against a short-notice opponent, that's a little troubling. He got the decision win, but didn't bump his stock much higher in the process. Let's hope his next opponent gives him more to work with.

Most Frightening: Yves Edwards
It wasn't so much the punch that put him out, but the way he went down that made me cringe. The back of Edwards' head thudded off the mat with a sickening sound and he lay there motionless for several minutes afterward. That always makes for an unnerving sight, but the 34-year-old Edwards is such a beloved character in this sport that it made it even tougher than usual to sit there and wait for him to show signs of recovery. Those kinds of knockouts are the scariest and probably the most dangerous. The blow Edwards took to the back of the head as a result of the fall seemed much worse and more damaging than the punch itself, and yet there was really nothing anyone could do to prevent it or soften the impact. The referee – or in this case, a compassionate opponent like Stout – can stop a fighter from taking needless punches after he's out, but nobody can do anything about the effects of gravity on a suddenly unconscious man.

Most Surprising: Dave Herman
Giving up nearly thirty pounds to a monstrous jiu-jitsu specialist, all while claiming that jiu-jitsu "doesn't work," didn't seem like a recipe for success. But to Herman's credit he took Jon Olav Einemo's best shots and gave back more than the big man could handle. Less surprising than Herman's victory was just how fun the fight was to watch. It had so many ups and downs and ebbs and flows that it made eight minutes of fighting feel like twenty. Only, you know, in the good way. Enjoy your Fight of the Night bonus money, gentleman. You both earned it.

The 'Be Careful What You Wish For' Award: Kenny Florian
The move down to featherweight sounded like a pretty hellish, but business-savvy one for KenFlo. He saw the writing on the wall at lightweight and realized that if he didn't want to turn into a gatekeeper, he needed to find a fresh start in a new division. The win over a very tough Diego Nunes at 145 pounds accomplished that. He has a new life as a featherweight and will "more than likely" get a crack at Jose Aldo now, according to Dana White. At the same time, a five-round fight with Aldo is going to be a tough night of work. I know Florian wants the challenge, and he might as well find out sooner rather than later if he's up for it, but I hope he knows what he's in for when he starves himself for a chance to get in the cage with that little buzz-saw.

Most Charismatic: Mark Munoz
The great thing about Munoz is that he's a powerful, smash-mouth kind of fighter, but with a Labrador's enthusiasm for life and everything in it. Even when he's talking about getting rocked by Maia, his tone and expression suggest that he thought it was kind of fun, like going down a scary water slide. That kind of zeal for everything is infectious, and it makes it impossible not to like him. With the decision over Maia he has three straight victories under his belt, with each win more impressive than the last. He might not ever be champion, or even a top contender, but I can't honestly say that I care. He's just so fun to have around. And yeah, he's a pretty good fighter, too.