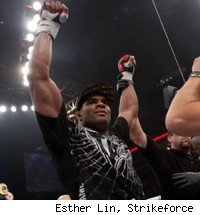 The Strikeforce heavyweight grand prix will resume Saturday night in Dallas with a new rule in place: a sudden victory round to settle a draw.

When the GP was first announced in January, Strikeforce CEO Scott Coker said that a draw would be settled by an independent fourth judge who would "determine who advances or who wins based on the fighter's overall performance in the fight."

However, Marc Ratner, Zuffa's vice president of regulatory affairs, informed MMA Fighting on Sunday that Zuffa, the new parent company of the Strikeforce, has decided that all tournament fights ending in a draw will now be settled by a fourth sudden victory round. There will not be a fourth judge assigned to the tournament fights anymore.

Antonio Silva and Sergei Kharitonov advanced to the semifinals of the tournament in February. Saturday's night card, which will air on Showtime, will feature Alistair Overeem vs. Fabricio Werdum and Josh Barnett vs. Brett Rogers.

The semifinals of the GP are slated for the fall.